Pope Francis backs International Day for the Eradication of Poverty 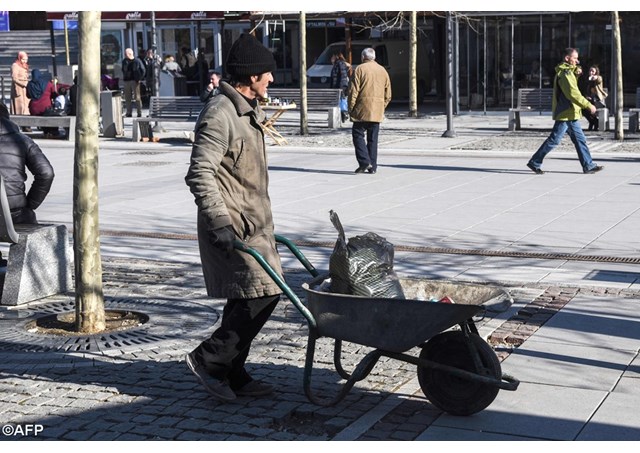 (Vatican Radio) During the Sunday Angelus in St Peter’s Square, Pope Francis reminded the crowds that on Tuesday, 17th October, we mark the International Day for the Eradication of Poverty.

It’s an occurrence that was established 25 years ago by the UN and it continues to challenge leaders and policymakers to put in place appropriate social protection systems and measures that cover everybody, especially the most vulnerable.

In his address on Sunday, Pope Francis said “poverty has nothing to do with fatality: it stems from causes that must be recognized and removed”.

One organization that is marking the International Day for the Eradication of Poverty is Caritas Europa with a call to leaders to ensure that no one is left under the poverty line.

Shannon Pfohman, Policy and Advocacy Director of Caritas Europa told Linda Bordoni why it is important to mark a day such as this in 2017 and about how she is looking forward to the establishment by Pope Francis, on November 19th, of the World Day of the Poor.

Shannon Pfohman explains that a Day such as this is an important awareness raising event, globally, because the scourge of poverty is still of enormous proportions.

She says that “despite the European Union’s efforts to tackle poverty starting with the 2020 European Strategy Goals which including a target to diminish the number of people in poverty, little has improved” for a number of reasons.

“So today it is an important day to remind policy makers and world leaders of the importance to focus attention on the situation of poverty today” she said.

Caritas Europa has issued a statement entitled ‘Let’s make poverty history by 2030!”. Pfohman explains that this is related to the Sustainable Development goals adopted by the UN and it refers to the Agenda 2030.

“We are now hoping that this agenda will contribute to ending poverty because the first goal of the SDGs is to end poverty and it has a number of different targets that governments are supposed to adopt and incorporate in their National Plan in order to meet this – and other goals - by 2030” she said.

Although the European continent is home to many of the world’s richest nations, it is by no mean free from the scourge of poverty. Pfohman said that there are different understandings of what we mean when we speak of poverty: “Pope Francis often refers to material and spiritual poverty”.

For the European Commission, poverty is measured, Pfohman explained, by considering three main elements linked to income, to social exclusion and material deprivation and to very low work intensity.

“Every fourth person in the EU is experiencing at least one of these three forms of poverty or social exclusion” she said.

Pfohman speaks of the boost organizations such as Caritas receive from the Pope.

“Pope Francis and the Catholic Social Teaching is the basis for our advocacy message and having a strong speaker like the Pope makes our message louder and heard more globally” she said.

Looking ahead to the near future she said: “We look forward to him introducing the World Day of the Poor on November 19th which will be an attempt to look at the many forms of material and spiritual poverty that poison people’s hearts and harm their dignity”.

Pfohman also said the Pope will be making an appeal to society in the week before November 19th to focus on the globalization of indifference and to put our beliefs into action: “as Pope Francis says we are not talking about statistics, we are talking about people”.

Pfohman also speaks about the work Caritas Europa is doing and says that one of the suggestions for improvement is very much linked to the need for European Governments to revise their social protection system.

In this regard, she said, Caritas has a number of recommendations, the first of which sees the family as a vital cell of society and as a safety net: “We wish to ensure the right to family life by promoting a series of family oriented policies”.

The second recommendation, she continued, regards fostering inclusive labour markets and recognizing the value of work and people’s contribution to society.

The third, regards the revamping of “the social protection system to ensure comprehensive national social provision coverage to meet the needs of all persons residing in the country”.

Pfohman says Caritas has numerous other recommendations but she highlights that at Caritas they are also hopeful that the European Pillar of Social Rights which should be proclaimed on November 17th at the EU Social Summit “will be another support for member States in their effort to tackle poverty and social exclusion throughout Europe”.