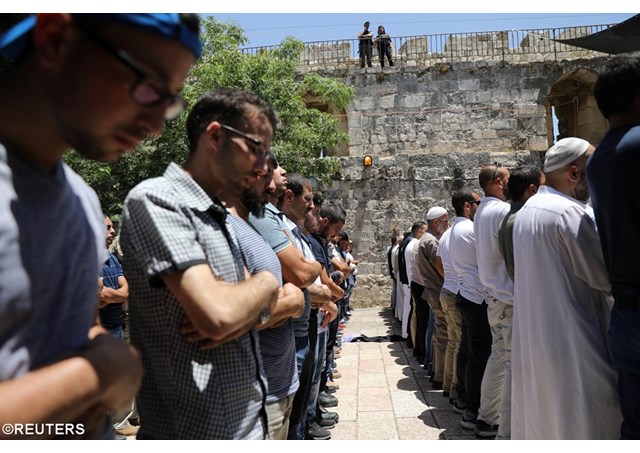 (Vatican Radio) Leaders of all the Christian Churches in Jerusalem have condemned the recent escalation of violence at the Temple Mount, or Haram ash-Sharif, a site sacred to Christians, Muslims and Jews.

Last Friday, three Arab Israeli gunmen opened fire on police officers at one of the gates adjacent to the site. Two policemen were killed before the attackers were shot dead, as they fled back into the complex.

In a joint statement, the heads of all 13 Christian communities in the city strongly condemned the attack and voiced concern about any changes to the historical agreement regulating access to religious sites in the Holy Land.

The so-called ‘Status Quo’ governing ownership of the holy places was drawn up in the 18th century. The Christian leaders say “any threat to its continuity and integrity could easily lead to serious and unpredictable consequences”. They also pray “for a just and lasting peace” throughout the region.

Philippa Hitchen spoke to one of the signatories of the statement, Palestinian Bishop Munib Younan, head of the Evangelical Lutheran Church of Jordan and the Holy Land….

Bishop Younan says the position of the Christian leaders is very clear: “the holy places are places for worship, meditation and prayer, not places for conflict and fighting or disagreement or war”.

He also believes the measures taken in the aftermath of the attack “have really raised the tensions”, in particular the closure of the site to Muslims for Friday prayers and the installation of metal detectors. He insists there must be free access to the holy places and there cannot be a collective punishment “because of an attack by two persons”

Asked about the need to guarantee security, he notes that during Ramadan every Friday between four and five hundred thousand Muslims enter the site, “and everything goes smoothly”. He stresses that it is vital to respect the ‘status quo’ and maintain the Temple Mount under the custodianship of King Abdullah of Jordan.

Noting that both King Abdullah and Palestinian President Mahmoud Abbas condemned the attack, Bishop Younan says “in Palestinian society there are people who think differently” but the vast majority do not condone violence. However, he says that “mistrust is so deep” it’s essential to find a political solution to end “the Israeli occupation, which is considered illegal”.

Bishop Younan praises the position of Israel’s Chief Rabbinate and insists “we should not allow any radical group to make us hostages. He notes the religious leaders have a code of conduct “to respect each other’s holy places and not create any provocation against the other”.