Pope to Egypt's priests and religious: be sowers of hope and dialogue 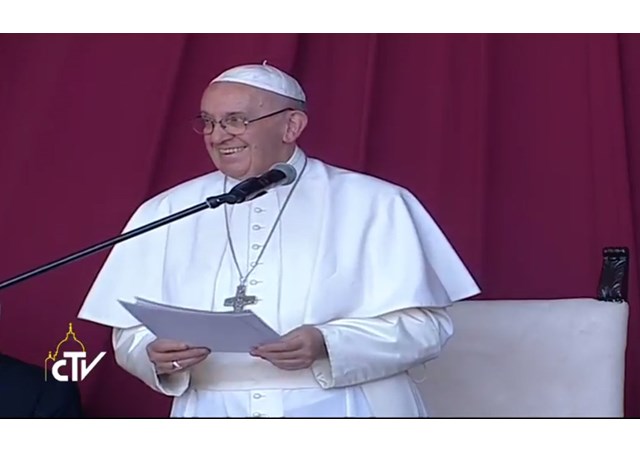 (Vatican Radio) Pope Francis on Saturday told Egypt’s priests, religious and seminarians to be sowers of hope, builders of bridges and agents of dialogue, despite the many difficulties they face.

The pope’s words came during his final encounter, a prayer service at the seminary in Cairo at the end of his two day visit to the North African nation.

Pope Francis began by thanking and encouraging the leaders of this tiny Catholic community for their daily witness “amid many challenges and often few consolations”.

The Catholic Coptic Church, the largest of seven different rites, counts less than 200.000 members, or less than half a percent of the population. The Pope said despite the many negative and despairing voices, priests and religious there are called to be a positive force within society.

Pope Francis then urged the Catholic leaders to resist the many temptations they encounter, beginning with the desire to be led, rather than to lead the Church. A pastor, he said, is creative and always “share the caress of consolation, even when he is brokenhearted”.

The Pope also warned against the temptation of complain, to gossip, to compare oneself to others and to harden one’s heart, presuming to be served, rather than to serve others.

Finally he urged them to avoid the temptations of individualism and losing their sense of direction. Your identity, he told them, “is to be Copts – rooted in your noble and ancient origins – and to be Catholics – part of the one and universal Church”.

Pope Francis concluded by recalling the great treasure of monastic life which has enriched the Church in Egypt since the first centuries. He urged today’s priests and religious to follow the examples of St Paul the Hermit, St Anthony, the Desert Fathers, and all monks and nuns who by their lives have been “salt and light” for the whole of society, especially for the poorest and those most in need.

Please see below the full address of Pope Francis to Priests, Religious and Seminarians at Saint Leo the Great Patriarchal Seminary, Maadi

As-salamu alaykum!   Peace be with you!

I am happy to be with you in this house of formation for priests, which represents the heart of the Catholic Church in Egypt.  I am pleased to greet you, the priests and consecrated men and women of the small Catholic flock in Egypt, as the “leaven” which God is preparing for this blessed land, so that, together with our Orthodox brothers and sisters, his Kingdom may increase in this place (cf. Mt 13:13).

I wish first of all to thank you for your witness and for the good that you do every day amid many challenges and often few consolations.   I want to encourage you!  Do not be afraid of the burdens of your daily service and the difficult circumstances some of you must endure.  We venerate the Holy Cross, the instrument and sign of our salvation.  When we flee the Cross, we flee the resurrection!

This, then, demands believing, witnessing to the truth, sowing and cultivating without waiting for the harvest.  In fact, we reap the fruits of so many others, whether consecrated or not, who have generously worked in the Lord’s vineyard.  Your history is filled with such people!

Although there are many reasons to be discouraged, amid many prophets of destruction and condemnation, and so many negative and despairing voices, may you be a positive force, salt and light for this society.  Like the engine of a train, may you be the driving force leading all towards their destination.  May you be sowers of hope, builders of bridges and agents of dialogue and harmony.

This will be possible if consecrated men and women do not give in to the temptations they daily encounter along their way.  I would like to highlight some of the greatest of these temptations.

1. The temptation to let ourselves be led, rather than to lead.  The Good Shepherd has the responsibility of guiding the sheep (cf. Jn 10:3-4), of bringing them to fresh pastures and springs of flowing water (cf. Ps 23).  He cannot let himself be dragged down by disappointment and pessimism: “What can I do?”  He is always full of initiative and creativity, like a spring that flows even in the midst of drought.  He always shares the caress of consolation even when he is broken-hearted.  He is a father when his children show him gratitude, but especially when they prove ungrateful (cf. Lk 15:11-32).  Our faithfulness to the Lord must never depend on human gratitude: “Your Father who sees in secret will reward you” (Mt 6:4, 6, 18).

2.  The temptation to complain constantly.  It is easy to always complain about others, about the shortcomings of superiors, about the state of the Church and society, about the lack of possibilities…  But consecrated persons, though the Spirit’s anointing, are those who turn every obstacle into an opportunity, and not every difficulty into an excuse!  The person who is always complaining is really someone who doesn’t want to work.  It was for this reason that the Lord said to the pastors: “Lift your drooping hands and strengthen your weak knees” (Heb 12:12; cf. Is 35:3).

3.  The temptation to gossip and envy.  It is a great danger when consecrated persons, instead of helping the little ones to grow and to rejoice in the successes of their brothers and sisters, allow themselves to be dominated by envy and to hurt others through gossip.  When, instead of striving to grow, they start to destroy those who are growing; instead of following their good example, they judge them and belittle their value.  Envy is a cancer that destroys the body in no time: “If a kingdom is divided against itself, that kingdom cannot stand.  And if a house is divided against itself, that house will not be able to stand” (Mk 3:24-25).  In fact, “through the devil’s envy death entered the world” (Wis 2:24).  Gossip is its means and its weapon.

4.  The temptation to compare ourselves to others.  Enrichment is found in the diversity and uniqueness of each one of us.  Comparing ourselves with those better off often leads to grudges; comparing ourselves with those worse off often leads to pride and laziness.  Those who are always comparing themselves with others end up paralyzed.  May we learn from Saints Peter and Paul to experience the diversity of qualities, charisms and opinions through willingness to listen and docility to the Holy Spirit.

5.  The temptation to become like Pharaoh, that is to harden our hearts and close them off to the Lord and our brothers and sisters.  Here the temptation is to think that we are better than others, and to lord it over them out of pride; to presume to be served rather than to serve.  It is a temptation that, from the very beginning, was present among the disciples, who – as the Gospel tells us – “on the way argued with one another who was the greatest” (Mk 9:34).  The antidote to this poison is: “If anyone would be first, he must be last of all and servant of all” (Mk 9:35).

6.  The temptation to individualism.  As a well-known Egyptian saying goes: “Me, and after me, the flood!”  This is the temptation of selfish people: along the way, they lose sight of the goal and, rather than think of others, they are unashamed to think only of themselves, or even worse, to justify themselves.  The Church is the community of the faithful, the Body of Christ, where the salvation of one member is linked to the holiness of all (cf. 1 Cor 12:12-27; Lumen Gentium, 7.)  An individualist is a cause of scandal and of conflict.

7.  The temptation to keep walking without direction or destination.  Consecrated men and women can lose their identity and begin to be “neither fish nor fowl”.  They can live with a heart between God and worldliness.  They can forget their first love (cf. Rev 2:4).  Indeed, when they lose clear and solid identity, consecrated men and women end up walking aimlessly; instead of leading others, they scatter them.  Your identity as sons and daughters of the Church is to be Copts – rooted in your noble and ancient origins – and to be Catholics – part of the one and universal Church: like a tree that, the more deeply rooted it is in the earth, the higher it reaches to the heavens!

Dear consecrated friends, resisting these temptations is not easy, but it is possible if we are grafted on to Jesus: “Abide in me, and I in you.  As the branch cannot bear fruit by itself, unless it abides in the vine, neither can you, unless you abide in me” (Jn 15:4).  The more we are rooted in Christ, the more we are alive and fruitful!  Only in this way can we preserve the wonder and the passion of our first encounter with God, and experience renewed excitement and gratitude in our life with God and in our mission.  The quality of our consecration depends on the quality of our spiritual life.

Egypt has enriched the Church through the inestimable value of monastic life.  I urge you, therefore, to draw upon to the example of Saint Paul the Hermit, Saint Anthony, the holy Desert Fathers, and the countless monks and nuns who by their lives and example opened the gates of heaven to so many of our brothers and sisters.  You too can be salt and light, and thus an occasion of salvation for yourselves and for all others, believers and non-believers alike, and especially for those who are poor, those in need, the abandoned and discarded.

May the Holy Family protect and bless all of you, your country and its entire people.  With all my heart, I invoke God’s blessings on you, and through you I greet the faithful whom the Lord has entrusted to your care.  May he grant you the fruits of his Holy Spirit: “love, joy, peace, patience, kindness, goodness, faithfulness, gentleness, self-control” (Gal 5:22).

You are always in my heart and in my prayers.  Take heart and keep moving forward with the help of the Holy Spirit!  “This is the day that the Lord has made, let us rejoice in him!”  And please, don’t forget to pray for me!