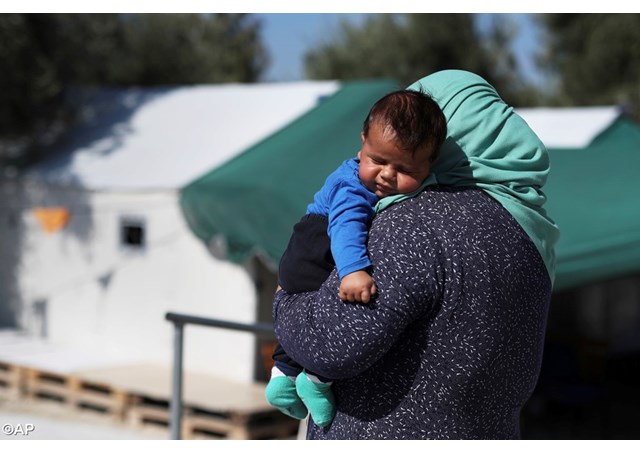 (Vatican Radio) This week sees the first anniversary of an agreement between the European Union and Turkey which aimed to stem the flow of migrants and refugees seeking protection in Europe.

One year on, the controversial deal is strongly criticized by humanitarian agencies who say it has left thousands of vulnerable people stranded in degrading conditions in Greece, while forcing others to take dangerous alternative routes as they seek protection in the EU.

Under the terms of the agreement, Ankara agreed to stop asylum seekers from crossing by sea to the Greek islands in return for three billion euros in aid to deal with the three million Syrian refugees who are living on Turkish soil.

Syrian refugees who had reached the Greek islands were to be returned to Turkey, while Syrian asylum seekers in Turkey were to be resettled in the EU. Today, thousands find themselves in a limbo.

In light of the terrible consequences on vulnerable people’s lives and health, Caritas Europa is calling on EU Member State governments to prioritize respect for human dignity and stop externalizing the management of migration.

Leïla Bodeux explained that the main aim of the deal was to try and stem migration flows from Syria into Europe and keep asylum seekers and forced migrants out of the EU.

She pointed out that the deal was signed when the so-called ‘Balkan route’ was closed, a reality that has led to the fact that forced migrants have been trapped on Greek islands and in Greece instead of being able to seek asylum in other EU countries.

The agreement, she said “basically tries to fast-track returns of migrants from Europe to Turkey”.

Bodeux describes the current conditions of the thousands currently trapped in Greece as “dire and horrendous”.

She said health conditions for many are bad also because a wave of cold weather in Greece has had severe consequences on those sleeping in tents, including some deaths from fires lit inside the tents in the attempt to heat them.

Also, “there is a lot of anxiety because they do not know what will happen with their requests, so they have been waiting there in the reception camps, some of which have been turned into detention camps, where there is a total lack of security, and a  lot of violence” she said.

Bodeux said this is particularly serious for the most vulnerable: the women and children. She said the migrants  are also subject to violent acts perpetrated by people outside the camps who oppose migration.

“This is also due to the fact that the Greek asylum system is over-stretched because of all the people living in the islands. There are currently some 15.000 migrants on the islands and the Greek system is not fit for welcoming all these people in an adequate way” she said.

She says that Caritas Europa is calling on EU member States to show solidarity towards people who are fleeing war and violence.

“We are calling on member States to welcome more refugees in their countries,  to stop externalizing migration policies and to stop keeping refugees and forced migrants in original transit countries” she said.

Bodeux pointed out that Europe is still a wealthy continent and should be prepared to take its fair share of people in seek of protection.

This means, she explained, that people must be given the possibility of coming to Europe safely -  avoiding dangerous routes in which they risk their lives; they must also be able to avoid  having to resort to people smugglers: “this means issuing more humanitarian visas, opening up humanitarian corridors, stepping up the number of people being re-settled in EU countries and facilitating family reunification”.

Pope Francis has repeated called on the international community to respect the dignity of all migrants, to provide them with safe passages to safety and to offer a welcome. Bodeux said his voice is helpful and welcome also because it helps change the negative narrative surrounding migration.

“To have a really strong and respective voice with a more positive and constructive stance on migration, a voice that also highlights the added value of these people coming into Europe, as well as reminding member States that they need to fulfill their human rights commitments and the Geneva Convention, is very helpful” she said.

She said that the Pope’s words are also very useful in that they highlight the good work that is being done for example through voluntary work to help asylum seekers.

Bodeux concludes expressing her belief that the EU needs to change its narrative and its strategy towards migration.

“Externalizing policies is really a short sighted stance and it will not help to find solutions to the problems forced migrants are facing, so the EU needs to believe more in safe and legal migration policies and to have a long-term approach towards migration; otherwise people will still reach EU countries through dangerous means and this is certainly counterproductive and also shameful in terms of human rights and the respect for human dignity” she said.

To find out more about the work of Caritas Europa click here.