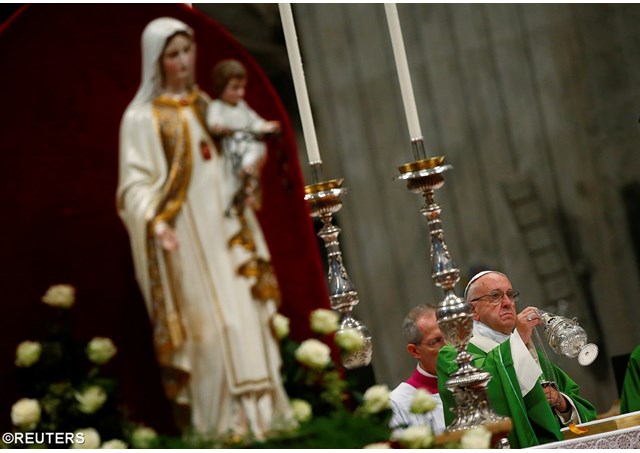 (Vatican Radio) Pope Francis celebrated Mass on Sunday for the Jubilee for Prisoners in Saint Peter’s Basilica, during which he reminded prison detainees to never lose hope, or fall into the temptation that they can never be forgiven.

Around 1,000 detainees from 12 countries took part in the weekend celebrations, along with their families, prison chaplains and staff, and various associations.

The Jubilee for Prisoners marks one of the final major events of the Jubilee of Mercy, which will come to an end on November 20.

Pope Francis centred his homily for Mass for the Jubilee of Prisoners on the theme of hope as it appears in the day’s Mass readings.

For instance, there are the seven brothers from the second book of Maccabees who speak about the hope of being raised again by God, and then Jesus’ response to the Sadducees, that God is not “the God of the dead, but of the living.”

“Hope is a gift of God,” and should be nourished, the Pope said.

“Whenever someone makes a mistake, the Father’s mercy is all the more present, awakening repentance, forgiveness, reconciliation, and peace.”

The Pope acknowledged that the loss of freedom experienced by detainees, is the worst part of serving time for one’s crimes. However, he urged those in prison to maintain the “breath” of hope.

The Holy Father turned to day’s reading from the letter to the Romans, in which “Paul almost seems to tell us that God too hopes”.

“His mercy gives him no rest. He is like that Father in the parable, who keeps hoping for the return of his son who has fallen by the wayside”.

“If God hopes, then no one should lose hope.  For hope is the strength to keep moving forward.  It is the power to press on towards the future and a changed life.  It is the incentive to look to tomorrow, so that the love we have known, for all our failings, can show us a new path.”

Pope Francis spoke of the “hypocrisy” of those who see prisoners only as “wrongdoers”, and who disregard the possibility of rehabilitation.

Going off the cuff from his prepared homily, the Pope said how every time he enters a prison, he asks himself: “‘Why them and not I?’ All of us have the possibility of making mistakes.”

The Holy Father reminded those in prison to not be held “captive” by their past mistakes, and “never yield to the temptation of thinking that we cannot be forgiven.”

Pope Francis turned his reflection to the importance of forgiveness among those who have experienced violence or abuse against themselves or their loved ones.

Acknowledging that there are some wounds that only God can heal, the Pope said that, nonetheless, “when violence is met with forgiveness, even the hearts of those who have done wrong can be conquered by the love that triumphs over every form of evil.”

“In this way, among the victims and among those who wronged them, God raises up true witnesses and workers of mercy.”

Pope Francis concluded his reflection by turning to the statue of Our Lady of Mercy, an image of Mary with the child Jesus, who is holding a set of chains.

“May she intercede for you, so that your hearts can experience the power of hope for a new life, one worthy of being lived in complete freedom and in service to your neighbour.”