Pope: God’s Kingdom grows through docility not with organization charts 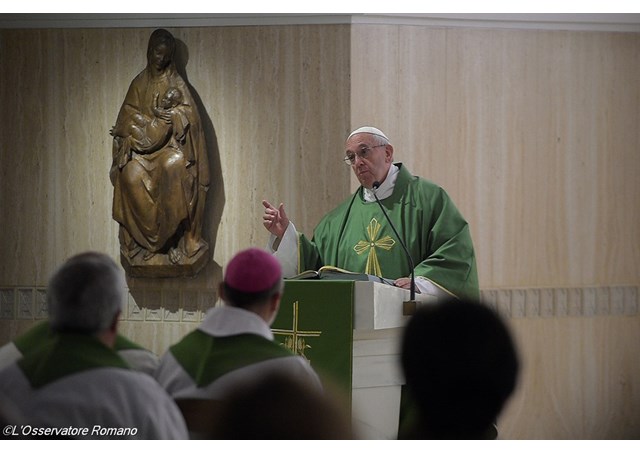 (Vatican Radio) Pope Francis said God’s Kingdom grows through its members showing docility and warned Christians against concentrating too much on structures and organization charts. He was speaking during his morning Mass on Tuesday celebrated in the chapel of the Santa Marta residence.

Listen to this report by Susy Hodges with clips of the Pope's voice:

Taking his inspiration from the day’s readings, Pope Francis reflected on the nature of God’s Kingdom during his homily, saying it is not a fixed structure but constantly evolving and describing what helps it to grow. He stressed that God’s Law is not just there to be studied but to journey forward with during our lives.

The Pope reminded how Jesus in his parable about things in our daily lives spoke about the yeast that does not remain yeast because in the end it is mixed in with the flour and therefore it is on a journey and becomes bread. And then there is the seed that does not remain a seed because it dies and gives life to the tree.  Both the yeast and the seed, explained Pope Francis, are on a journey to do something but in order to do this they die. It is not a problem of smallness, be it small, of little count or a big thing. It’s a question of journeying and whilst on this journey the transformation occurs.

The Pope went on to warn against being a person who sees the Law but does not journey forward and has a rigid attitude.

“What is the attitude that the Lord asks from us in order that the Kingdom of God can grow and be bread for everybody and is a house too for everybody?  Docility: the Kingdom of God grows through docility to the strength of the Holy Spirit. The flour ceases to be flour and becomes bread because it is docile to the strength of the yeast and the yeast allows itself to be mixed in with the flour… I don’t know, flour has no feelings but allowing itself to be mixed in one could think that there is some suffering here, right? But the Kingdom too, the Kingdom grows in this way and then in the end it is bread for everybody.”

Just as the flour is docile to the yeast, continued Pope Francis, the seed too allows itself to be fertilized and loses its identity as a seed and becomes something much larger: it transforms itself. He said it’s the same with the Kingdom of God that is journeying “towards hope” and “journeying towards fullness.”

Saying the Kingdom of God re-creates itself every day, the Pope stressed that the Kingdom grows through our docility to the Holy Spirit that, just like the pinch of yeast or the tiny seed, transform themselves in order to grow. He warned that if Christians do not journey forward they become rigid and this rigidity makes them orphans without the Father.

“A rigid person only has masters and no father. The Kingdom of God is like a mother that grows and is fertile, gives of herself so that her children have food and lodging, according to the example of the Lord. Today is a day to ask for the grace of docility to the Holy Spirit. Many times we are not docile to our moods, our judgements. ‘But I do what I want….'  The Kingdom does not grow in this way and neither do we grow. It is docility to the Holy Spirit that makes us grow and be transformed like the yeast and the seed. May the Lord give us all the grace of this docility.”