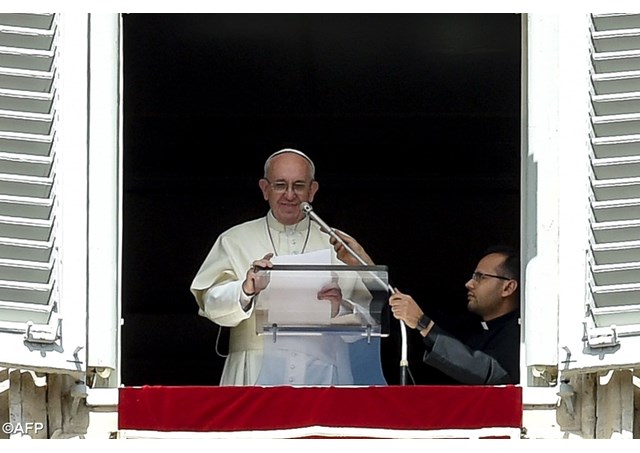 (Vatican Radio) Pope Francis has asked for prayers for peace in a world in which war is everywhere.

Speaking on Sunday morning after the Angelus prayer, the Pope said that on Tuesday he will travel to the Umbrian town of Assisi to participate in the Day of Prayer for Peace.

“Today, more than ever, we need peace in this war which is everywhere in the world. Let us Pray for peace!” he said.

Explaining that he is going to Assisi in the footsteps of Saint John Paul II who called for the World Day of Prayer for Peace thirty years ago, he invited all parishes, all ecclesial associations and individual believers across the world to participate in the event with their prayers.

“Following the example of Saint Francis of Assisi, a man of brotherhood and meekness, we are all called to offer a strong testimony to the world of our common commitment twoards peace and reconciliation between peoples” he said.

And he appealed to everyone to join in prayer on Tuesday: “may each of us take some time to pray for peace. The whole world united”.

The World Day of Prayer for Peace, organized and promoted by  the community of Sant'Egidio, is part of an annual meeting of religious leaders of different faiths who come together to pray for peace and to discuss critical global issues of peace, unity, and interreligious dialogue.

During his catechesis before the recitation of the Angelus prayer, Pope Francis reflected on the readings of the day, pointing out that “the spirit of the world is not the spirit of Jesus”.

He said that while worldliness is manifested in attitudes of corruption, deception and abuse of power that lead down the path of sin, a truly Christian lifestyle is “serious, but full of joy, committed to honesty, correctness, respect for others and for their dignity, and to the sense of duty.”

The Pope said that as Christians, we must respond to worldly cleverness with Christian astuteness, which is “a gift of the Holy Spirit.”

Lamenting the widespread corruption that pervades our society, he pointed out that it is important “to decide which direction to take” and said that when we seek to follow the logic of the Gospel and of brotherhood, “we become artisans of justice and open horizons of hope for humanity.”