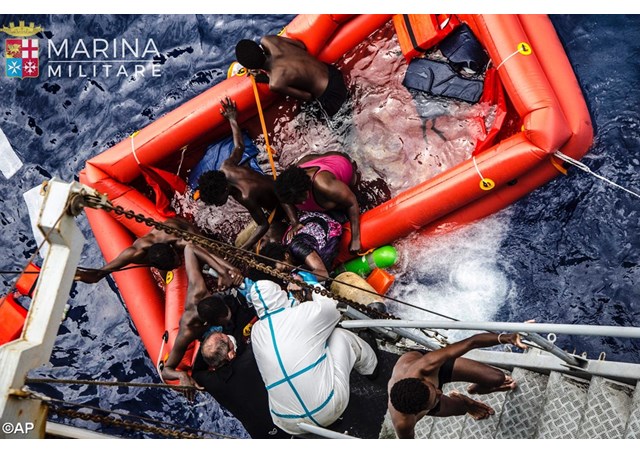 (Vatican Radio) A tragic succession of shipwrecks and drownings of forced migrants and refugees in the Mediterranean Sea is shining the spotlight on the inadequacy of European Union migration policy.

Tens of thousands of people fleeing conflict, persecution and poverty have attempted the dangerous Mediterranean crossing with more than 2.500 recorded drownings so far this year.

Caritas Europa and Jesuit Refugee Service Europe are calling on European policy-makers to alter their restrictive approach to migration and provide safe ways for people to enter Europe without risking their lives.

“We think that these policies are based on the protection of borders, not of people” she says.

Siebert says these policies will not stop people from trying to reach our countries, in fact they will force more and more people into the hands of smugglers and traffickers which of course, she points out,  is very harmful for refugees and asylum seekers.

She says that together with Caritas Europa and other Christian organizations JRS has been voicing its concerns to EU policy-makers since November 2014.

“We called for safe and legal pathways for protection in Europe; we released a policy paper which describes in detail what we wish to see on the EU level” she says.

Siebert mentions some steps which she says are necessary in order to be able implement and defend humanitarian law.

“We see the importance of humanitarian channels such as humanitarian visas, the facilitation of family reunification for refugees and migrants, and other humanitarian programmes such as more resettlement and lifting visa requirements when its justified on humanitarian grounds” she says.

“These measures, Siebert points out, should be complimentary to a fully functioning and humane asylum system in Europe”.

And while some European nations continue to build walls and voice indifference to the global scenario of increasing migration, JRS says people need to know that forced migrants are not just numbers, but real people fleeing conflict and persecution.

“The main message is to be humane and to treat people as people, and treat them with respect and know they are searching for better life conditions and are fleeing to protect their own human dignity” Siebert says.

As regards the EU policy-makers meeting JRS says it is hard to predict and outcome but it calls on them to be aware of the situation and it remains hopeful its message will be heard.

For the full statement ahead of the Justice and Home Affairs Council click here.