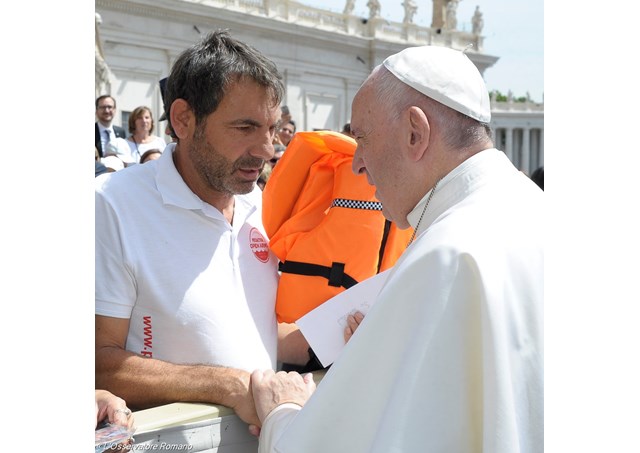 (Vatican Radio) "We are rescuers and we are saving lives in the Aegean Sea:" this is how the NGO Proactiva Open Arms is literally reaching out with arms extended, to save refugees landing on the Greek island of Lesbos.

At Wednesday’s General Audience, Proactiva founder Oscar Camps presented Pope Francis with the life jacket of a 6 year old girl who drowned together with her family as they tried to reach safety on Lesbos.

"I know. I know your story," the Pope said to Oscar Camps, who said he and his non-profit Spanish organization arrived on Lesbos after they saw the horrifying images of “hundreds of children dying along the shore and nobody was doing anything. " "Each boatload of people, has a dramatic tale to tell:" families are separated, orphaned children who lost their parents along the way now find themselves in a strange country, a continent that is not their own,  and no one to help them.

Camps said he and other lifeguards were indignant about the tragedy unfolding in nearby Greece.  He couldn’t just sit on the couch at home – so, he took 15,000 euros in savings and together with a group of volunteer rescue workers and lifeguards, set off for Lesbos last September.

Since then, the Proactiva team has been on hand to help the some 3,000 people, most fleeing the conflict in Syria, who arrive on the island each day. "There have been days when we’ve reached 8,000 in one day, without forgetting tragedies like that of October 28, 2015 in which more than 300 men and women and drowned," said Laura Lanuza, another Proactiva Open Arms volunteer.

Pope Francis visited the island of Lesbos on 16 April this year. On the flight back to Rome, he confessed to reporters that, for him, it had been a "sad journey" full of grief, having witnessed the plight of the refugees.

"With his visit, Pope Francisco gave us a lesson for everyone," Oscar Camps observed.  The Pope brought back to Rome three families of refugees, Camps recalled, “so we are now in the Vatican to thank him, returning the visit and to explain how the situation is developing [on Lesbos].”

The volunteer rescuer said the Pope congratulated the Proactiva team for their work and said they were in his prayers and that the current crisis situation is "no humanitarian crisis,” but a crisis “of humanity".