Pope: Gift of the Spirit renews our relationship with God 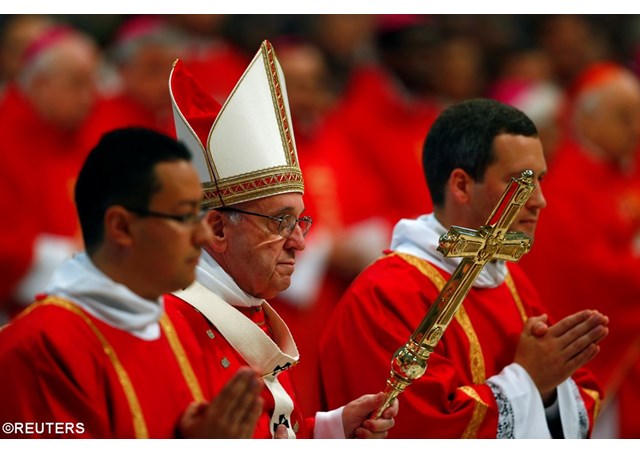 (Vatican Radio) Pope Francis preached on the passage “I will not leave you orphans” (Jn 14:18) during his homily at the Mass for Pentecost Sunday in St Peter’s.

Beginning with the first reading from St Paul’s Letter to the Romans, the Pope said, “Here we see our relationship renewed: the paternity of God is re-established in us thanks to the redemptive work of Christ and the gift of the Holy Spirit.” He continued, “The Spirit is given to us by the Father and leads us back to the Father. The entire work of salvation is one of 're-generation', in which the fatherhood of God, through the gift of the Son and the Holy Spirit, frees us from the condition of being orphans into which we had fallen.”

Too often in this world we see “the signs of being orphans,” such as loneliness, the desire to be “free of God,” or the difficulty in seeing others as brothers and sisters.

But, the Pope said, “being children of God runs contrary to this, and is our primordial vocation – we were made to be God’s children, it is in our DNA.” This relationship, though, was ruined by sin, and it is only through death and resurrection of Jesus, God’s only-begotten Son, that that relationship can be reborn. It is precisely on account of Jesus’ death on the Cross that the Holy Spirit “has been poured out upon humanity like a vast torrent of grace.”

Jesus’ promise that He will not leave us orphans also reminds us of “the maternal presence" of Mary at Pentecost, the Pope said. “The Mother of Jesus is with the community of disciples gathered in prayer: she is the living remembrance of the Son and the living invocation of the Holy Spirit. She is the Mother of the Church.”

The Pope concluded his homily by saying that the gift of the Spirit allows us “to enter into a new experience of fraternity, allowing us to see one another “as brothers ansd sisters whose differences can only increase our joy and wonder at sharing in this unique fatherhood and brotherhood.”

You can find the full text of Pope Francis' homily for Mass on Pentecost here.