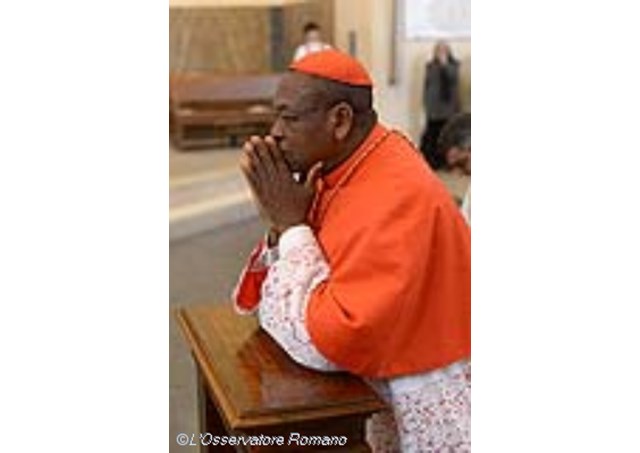 The Archbishop of Abuja, John Cardinal Onaiyekan has called for a sincere, moral and national, spiritual rebirth in Nigeria. The Cardinal has described the spiritual rebirth required as an effective antidote for the nation’s socio-economic and moral challenges. The Cardinal made the call in his homily at the opening Mass of the first plenary meeting of the Catholic Bishops’ Conference of Nigeria (CBCN) held recently at Our Lady Queen of Nigeria Pro-Cathedral, Garki, Abuja. The theme of the week-long plenary was, The Catholic Church: Promoting Mercy, Social Justice and Peace.

According to Cardinal Onaiyekan, the nation’s two major challenges are corruption and insecurity which have a common moral source. While appreciating the efforts of the present Nigerian government at tackling the two challenges headlong, Cardinal Onaiyekan noted that the government could not deal with these challenges alone. He called on all Nigerians to collaborate and support the government. In his words: “We must, therefore, do all we can to mobilise everybody, each person with whatever arms available to us.”Adding, “In this regard, we must not underestimate the importance of our own spiritual weapons since our challenges have deep moral roots,” the Cardinal said.

The Cardinal further challenged all Nigerian nationals to go through a process of introspection with regard to the country’s two foremost challenges.

“Our inability to deal adequately with the terrorist insurgency has been closely linked with massive criminal corruption in the system.” While agreeing that recent revelations of diverted public funds to private pockets should anger Nigerians, the Cardinal stated that anger alone was not enough. “We must seek a positive and effective way forward, which takes on board our common spiritual and religious values.” Cardinal Onaiyekan stated that there should be no going back on the war against corruption, “a war that our Church has been waging for many years with our own appropriate weapons of prayer and exhortations.

To restore the nation into a decent society, we need to go beyond the legal processes; to a serious moral, national and spiritual rebirth. We need to explore alternative and parallel strategies based on moral principles of the three Rs namely – Repentance, Reparation and Reconciliation.

On the challenge of the war on terrorism, especially in the Northeastern part of the country, Cardinal Onaiyekan expressed sadness at the diversion of money meant for the purchase of arms and ammunition to execute the war. He added, “The nation’s gallant troops must no longer be improperly equipped to prosecute the war against the Boko Haram insurgency.”

Nevertheless, the Cardinal warned that the Boko Haram insurgency could not be solved solely with military action.

“To get to the root of the insurgency, other parallel strategies are called for. In general, Boko Haram members are not foreigners. They are our kith and kin. Does it not make more sense to win them back to our communities than to aim at killing them all off?