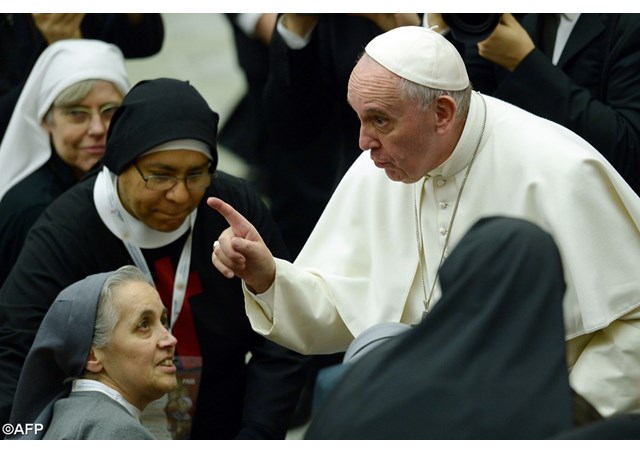 (Vatican Radio) Thousands of religious gathered in the Paul VI hall on Monday for an audience with Pope Francis concluding the Year for Consecrated Life.

At the heart of Pope Francis’ address to the men and women religious were three words, prophesy, proximity and hope.

Putting aside his prepared remarks, the Pope spoke directly to those present about obedience and how difficult it is to be obedient all the time. That level of obedience, the Holy Father said, was what the Son of God had. But he added, that there were some religious men and women who had a high level of obedience and underlined that this gift from the heart was in its nature prophesy.

Turning his attention to the second word proximity, the Pope stressed how important it was for those consecrated persons to reach out to both Christians and non-Christians, in their sufferings, their problems.

The Holy Father also renewed is warning against the damage that can be caused by gossip in the religious life. He again compared the gossiping religious to a terrorist who throws a bomb into the middle of their community.

Finally, focusing on the word hope, the Pope said having hope was at times difficult for him, especially when it comes to vocations. He described his sadness hearing about orders and monasteries with few religious or communities where the priests and nuns were getting older without people to carry on their work. He also underlined that prayer not money was the answer to an increase in candidates to the consecrated life. Thanking in particular nuns for the work they do, the Pope said, “what would the Church be like without nuns.”

The Year for Consecrated Life concludes on February 2nd with a Mass in St Peter’s Basilica presided over by the Holy Father.