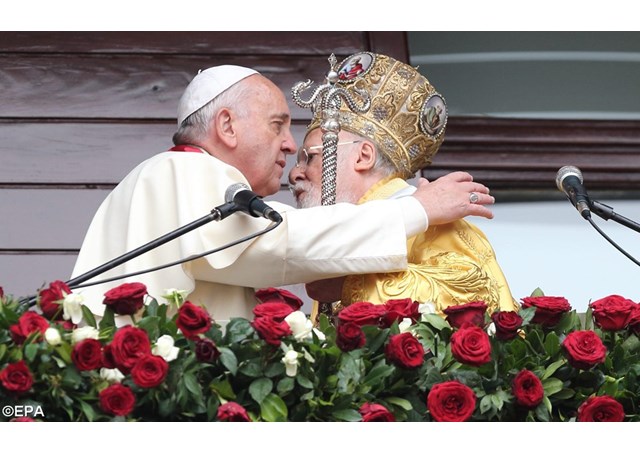 (Vatican Radio) In a message marking the feast of the apostle Andrew, patron saint of the Orthodox world, Pope Francis urges Catholics and Orthodox to offer a “credible and effective witness” to the Christian values of trust, respect, charity and reconciliation.

The message was hand delivered to the Orthodox leader in Istanbul by the head of the Pontifical Council for Promoting Christian Unity, Cardinal Kurt Koch, who led a delegation to the Patriarchal Church of St George for the feast of St Andrew on Monday November 30th.

In it, the Pope recalls his own visit to Turkey exactly a year ago, as well as the upcoming 50th anniversary of the lifting of mutual excommunications by their two predecessors, Pope Paul VI and Ecumenical Patriarch Athenagoras !st on December 7th 1965. By consigning those “painful memories to oblivion”, Pope Francis writes, and restoring a “relationship of love and fraternity”, there is no longer “any impediment to Eucharistic communion which cannot be overcome through prayer, the purification of hearts, dialogue and the affirmation of truth.”

At all levels of Church life, the Pope says, relations between Catholics and Orthodox must increasingly reflect the logic of love that leaves no room for the spirit of rivalry. Together, he insists, we must offer the world a credible witness to Christ’s message of reconciliation – especially in light of so much blood which has been shed in recent terrorist attacks.

Praising the Patriarch’s “fervent commitment to the critical issue of care for creation” Pope Francis says it is providential that the 50th anniversary of Catholic-Orthodox rapprochement occurs on the eve of the Year of Mercy. Asking all Orthodox faithful to pray that the Jubilee year may bear the spiritual fruits for which we yearn, the Pope concludes by assuring the Patriarch of his prayers for the Pan-Orthodox Synod which is due to take place in 2016.

To His Holiness Bartholomaios, Archbishop of Constantinople, Ecumenical Patriarch

Your Holiness, Beloved Brother in Christ,

A year has passed since we celebrated together, in the Patriarchal Church in the Phanar, the feast of Saint Andrew, the first-called Apostle and brother of Saint Peter.  The occasion was a moment of grace which permitted me to renew and to deepen, in shared prayer and personal encounter, the bonds of friendship with you and with the Church over which you preside.  It was with joy that I also experienced the vitality of a Church which unceasingly professes, celebrates and offers witness to faith in Jesus Christ, our one Lord and Saviour.  I am pleased once again to send a delegation of the Holy See to the Patronal celebrations as a tangible sign of my fraternal affection and the spiritual closeness of the Church of Rome to Your Holiness, as well as to the members of the Holy Synod, the clergy, monks and all the faithful of the Ecumenical Patriarchate.

In our profound communion of faith and charity, and grateful for all that God has accomplished for us, I recall the fiftieth anniversary on 7 December 2015 of the Joint Catholic-Orthodox Declaration of Pope Paul VI and the Ecumenical Patriarch Athenagoras I which expressed the decision to remove from memory and from the midst of the Church the excommunications of 1054.  The memory of the mutual sentences of excommunication, together with the offensive words, groundless reproaches, and reprehensible gestures on both sides, which accompanied the sad events of this period, represented for many centuries an obstacle to rapprochement in charity between Catholics and Orthodox.  Attentive to the will of our Lord Jesus Christ, who prayed to the Father on the eve of his Passion that his disciples “may be one” (Jn 17:21), Pope Paul VI and Patriarch Athenagoras I consigned these painful memories to oblivion.  Since then, the logic of antagonism, mistrust and hostility that had been symbolized by the mutual excommunications has been replaced by the logic of love and brotherhood, represented by our fraternal embrace.

While not all differences between the Catholic and Orthodox Churches were brought to an end, there now existed the conditions necessary to journey towards re-establishing the “full communion of faith, fraternal accord and sacramental life which existed among them during the first thousand years of the life of the Church” (Joint Catholic-Orthodox Declaration, 7 December 1965).  Having restored a relationship of love and fraternity, in a spirit of mutual trust, respect and charity, there is no longer any impediment to Eucharistic communion which cannot be overcome through prayer, the purification of hearts, dialogue and the affirmation of truth.  Indeed, where there is love in the life of the Church, its source and fulfilment is always to be found in Eucharistic love.  So too the symbol of the fraternal embrace finds its most profound truth in the embrace of peace exchanged in the Eucharistic celebration.

In order to progress on our journey towards the full communion for which we long, we need continually to draw inspiration from the gesture of reconciliation and peace by our venerable predecessors Paul VI and Athenagoras I.  At all levels and in every context of Church life, relations between Catholics and Orthodox must increasingly reflect the logic of love that leaves no room for the spirit of rivalry.  Theological dialogue itself, sustained by mutual charity, must continue to examine carefully the questions which divide us, aiming always at deepening our shared understanding of revealed truth.  Motivated by God’s love, we must together offer the world a credible and effective witness to Christ’s message of reconciliation and salvation.

The world today has great need of reconciliation, particularly in light of so much blood which has been shed in recent terrorist attacks.  May we accompany the victims with our prayers, and renew our commitment to lasting peace by promoting dialogue between religious traditions, for “indifference and mutual ignorance can only lead to mistrust and unfortunately even conflict” (Common Declaration, Jerusalem 2014).

I wish to express my deep appreciation for Your Holiness’s fervent commitment to the critical issue of care for creation, for which your sensitivity and awareness is an exemplary witness for Catholics. I believe that it is a hopeful sign for Catholics and Orthodox that we now celebrate together an annual Day of Prayer for the Care of Creation on 1 September, following the longstanding practice of the Ecumenical Patriarchate.  In this regard, I assure you of my prayers for the important international meeting on the environment to be held in Paris at which you will participate.

Your Holiness, it is incumbent upon humanity to rediscover the mystery of mercy, “the bridge that connects God and man, opening our hearts to the hope of being loved forever despite our sinfulness” (Misericordiae Vultus, 2).  For this reason I have called for an Extraordinary Jubilee of Mercy, a favourable time to contemplate the Father’s mercy revealed fully in his Son, Jesus Christ, and to become ourselves an effective sign of God’s love through our mutual pardon and works of mercy.  It is providential that the anniversary of that historic Joint Catholic-Orthodox Declaration concerning the removal of the excommunications of 1054 occurs on the eve of the Year of Mercy.  Following Pope Paul VI and Patriarch Athenagoras I, Catholics and Orthodox today must ask pardon of God and one another for divisions that Christians have brought about in the Body of Christ.  I ask you and all the faithful of the Ecumenical Patriarchate to pray that this Extraordinary Jubilee may bear the spiritual fruits for which we yearn.  I willingly assure you of my prayers for the events that your Church will celebrate in the year to come, especially the Pan-Orthodox Great Synod.  May this important occasion for all the Orthodox Churches be a source of abundant blessings for the life of the Church.

With fraternal affection in the Lord, I assure you of my spiritual closeness on the joyous feast of the Apostle Andrew, and I willingly exchange with Your Holiness an embrace of peace in the Lord Jesus.