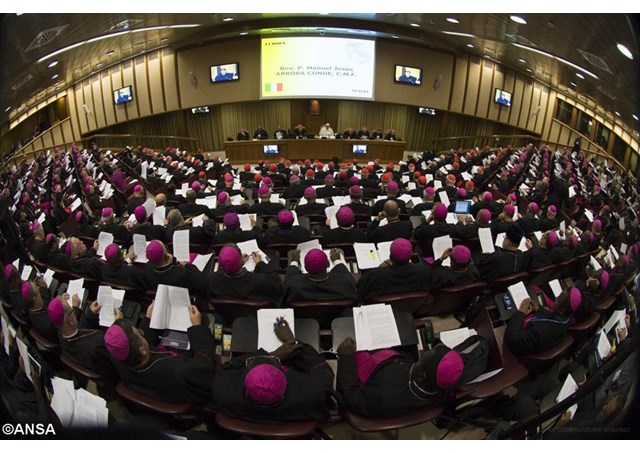 (Vatican Radio) The Synod of Bishops on the Family completed its final working day on Saturday, as bishops voted on a final document and approved a statement on families affected by conflicts in the Middle East, Africa and Ukraine.

Philippa Hitchen has been following the different stages of the meeting and talking to many of the bishops, religious and lay people who’ve taken part in the discussions. She reports on the atmosphere inside the hall as the final Synod document was presented to participants….

It’s hard to describe the mix of emotions that washed around the Synod Hall on Saturday at the close of this three week meeting. Elation, exhaustion, incredulity and relief were certainly among the reactions I heard from Synod Fathers as they worked their way painstakingly through all 94 points of their lengthy final text.  Surprisingly similar, I thought, to that indescribable blend of emotions that most mothers experience as they give birth to a new life.

There’s no denying there have been labour pains over the past weeks here, as tensions surfaced and fears were expressed, both in public and on the pages of letters sent to the Pope and members of the organizing committee. In the small groups and in the open debates, strong words and provocative language has been bandied around, both by those seeking some new developments in Church teaching and by those who resist any openings towards people in so–called irregular situations of cohabitation, remarriage or same-sex relationships.

Yet the final document has been welcomed by most as a carefully crafted work of art which seeks to balance the very different views and cultural perspectives of all Synod participants. Rather than producing any groundbreaking theological developments, it showcases a new, more inclusive way of working, which began with the questionnaires sent out to families around the world and concluded with the intense small group discussions inside the Synod Hall.

Inevitably, the more open, frank discussions of difficult issues, encouraged by Pope Francis at the start of the 2014 Synod, has required a new methodology to find agreement acceptable to all sides, without settling for a lowest common denominator. The key word in this process – unsurprisingly under a Jesuit Pope – is discernment, or the ability to listen, learn and respond to personal stories. Starting from the bible, the catechism and the teaching of popes past and present, pastors are encouraged to open doors and engage with every person and every family, not judging or condemning, but welcoming and caring for each individual need.

While the joys and sorrows of family life have been the main focus of discussions, the bishops have really been learning a new way of relating to each other in the family of the Church. Half a century on from establishment of the Synod of bishops, these Church leaders are moving towards a new way of collaborating more closely with each other and with the pope, respecting differences, while at the same time realizing the value of diversity.

You could call it a growing up and coming of age of that synodality that was born during the Second Vatican Council. Few of those Council Fathers are around today to witness the joy all parents feel as they watch their children mature and make their way in the world. But just as the document born during this Synod stresses the role of each generation in nurturing and handing on the faith, so today’s Synod Fathers will be looking back with gratitude as they strive to respond more effectively to the challenges facing the Church in the contemporary world.