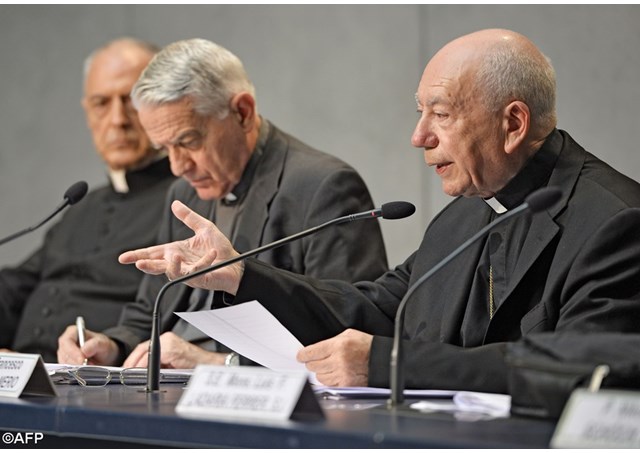 (Vatican Radio)  Pope Francis issued two Apostolic Letters motu proprio on Tuesday, by which he introduced reforms to the legal structures of the Church, which deal with questions of marital nullity. At a news conference presenting the reforms to journalists at the Press Office of the Holy See on Tuesday, the President of the Pontifical Council for Legislative Texts, Cardinal Francesco Coccopalmerio – who was also a member of the Special Commission appointed to study the issue and make the recommendations on which the reform is based – explained that the reforms do not touch the nature and purpose either of marriage, or of the Church’s marriage law: marriage is a sacrament and is by its nature indissoluble; when a marriage is accused of nullity, the Church merely investigates to see whether the parties presumed to be married ever actually executed a valid marriage contract in the eyes of the Church.

“We are not strictly talking then, about a legal process that leads to the ‘annulment’ of a marriage,” as though the act of the Church court were one of nullification. “Nullity,” Cardinal Coccopalmerio explained, “is different from annulment – declaring the nullity of a marriage is absolutely different from decreeing the annulment of a marriage.”

The President of the Pontifical Council for Legislative Texts went on to explain that the concern of the Holy Father is in the first place for the good of all the faithful, especially those of the faithful whose situations have been a cause of difficulty in living the Christian life as fully as possible. “The problem,” he said, “is rather of an exquisitely pastoral nature, and consists in rendering marriage nullity trials more swift and speedy, so as the more solicitously to serve the faithful who find themselves in such situations.”

Three specific changes most directly address the question of speed in the process: the removal of the need for a twofold conforming sentence from both the court of first instance and then from the appellate court, which automatically reviewed the acts of the first instance trial – meaning that a single trial in the first instance will be considered sufficient for persons, whose presumed marriage has been declared null, to enter into new marriages under Church law; the introduction of the possibility for a single first instance trial judge to be stably established*; the creation of an expedited trial process for certain cases, in which the evidence of nullity is abundant, and both parties accuse the marriage of nullity.

“The power of the keys of Peter remains ever unchanged,” explained the Secretary of the Congregation for the Doctrine of the Faith, Archbishop Luis Ladaria, SJ, who was also a member of the reform commission and present at the press conference on Tuesday. “In this [nullity] process as well, the appeal to the Apostolic See is open to all, in order that the bond between the See of Peter and the particular Churches be confirmed.” Archbishop Ladaria concluded his remarks saying, “We all hope that this reform of the Code of Canon Law will bring with it the fruit the Holy Father desires, and that many Pastors and faithful desire with him as well.”

* The 1983 Code of Canon Law already allowed for permission to be granted for cases to be tried by a single judge, though the change confirms in law what has been the practice for many years in many jurisdictions