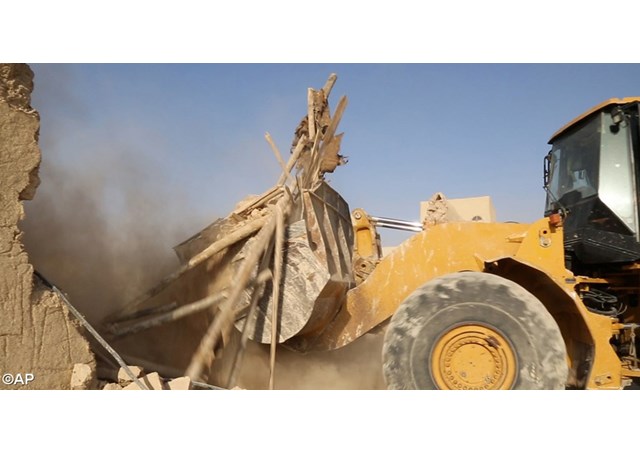 (Vatican Radio) The Chaldean Bishop of Aleppo Antoine Audo, on Friday (21 August) gave his reaction to the destruction of an ancient Catholic monastery in the Syrian town of Qaryatain by so-called Islamic State militants.  The monastery dates back to the 5th century after Christ, and is located in central Homs province. Bishop Audo said the IS group wanted to send a message of “violence and intolerance” by destroying this symbol of Christianity and encourage Syria's Christians to flee their homeland.  He spoke to Claire Gilbody Dickerson.

Listen to the interview with the Bishop of Aleppo Antoine Audo:

Asked for his reaction to the destruction of the monastery, Bishop Audo said: “As usual for us Christians, it is a message of violence and intolerance, a message to spread fear everywhere.”

The destruction of the monastery comes after the IS kidnapped 250 people in Qaryatain earlier this month , including dozens of Christians.

Referring to the hostages’ situation, Audo said the IS had “two goals” in kidnapping them: the first  was to obtain ransom money in exchange for the hostages’ release. The second aim of IS, according the Syrian Bishop, was to “spread a message of terror” and show people they were “powerful” and they didn’t believe in a political solution.

In addition, he conceded it was “possible” that the hostages could be killed, adding that the IS has “no conscience or morality” and “they are able to do anything”.