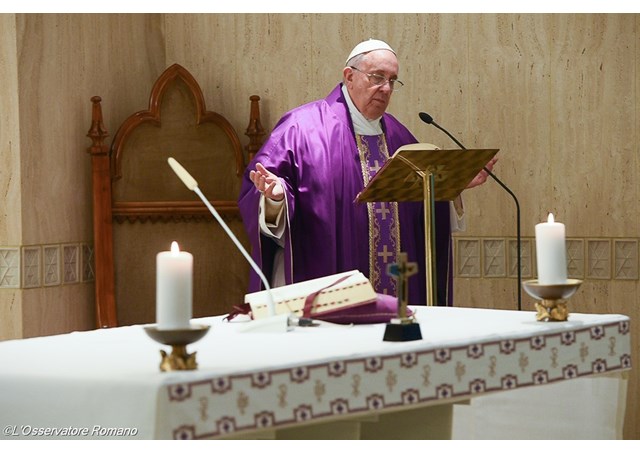 (Vatican Radio) Pope Francis on Monday warned against righteous hypocrisy and urged Christians to be merciful.

During his homily at morning Mass in the Casa Santa Marta, the Pope reflected on the Gospel readings of the day and on another Gospel passage pointing out that “where there is no mercy there is no justice”.

Referring to three women in the Bible, Pope Francis said they represent three allegorical figures of the Church.

The women he said are: Susanna - an innocent woman; an adulteress – a sinner; and a poor and needy widow.

They symbolize – the Pope said – the holy Church, the sinning Church and the needy Church.

They are all judged and ‘condemned’ by judges who are evil and corrupt.

Speaking of the Scribes and the Pharisees who took the adulteress before Jesus, Francis said their hearts were corrupted by rigidity:  “they thought they were pure because they observed the law” (…) but they did not know mercy” he said.

“They were not saints, they were corrupt. Because this kind of rigidity leads one live a double life: on the one hand they were condemning these women, and on the other they were seeking them out for a bit of fun. The description used by Jesus for them is hypocrites: they had double standards.”

And the Pope referred to those within the Church who judge and condenn others, saying they too have double standards. “With such rigidity – he said – one cannot breathe”.

Then speaking of the two elders (judges) who tried to blackmail Susanna, the Pope said they were corrupted by depravation  and had the vice of lust, a vice – he said – that becomes more ferocious and evil with age.

As regards the judge who was called upon by a poor widow to render a just decision against an adversary, the Pope said he was a judge who “neither feared God nor respected any human being”; he only cared about himself and was corrupted by the vice of greed for money and prestige.

All these judges – Pope Francis said – “the profiteer, the depraved and the rigid, did not know what the word mercy meant.”

“Corruption did not allow them to understand what mercy is, that one must be merciful. The Bible tells us that justice is to be found in mercy. The three women: the saint, the sinner and the needy, allegorical figures that represent the Church, suffer for lack of mercy. And God’s people today can find themselves before ‘judges’ who lack mercy, both in a civilian environment and in an ecclesiastical one. Where there is no mercy there is no justice.  When God’s people come close asking for forgiveness, it often finds itself condemned by one of these judges”.

The people of God – Francis said - come across persons “who exploit and make the most of them; “who deprive their souls of oxygen, robbing them of hope”; “who punish penitent sinners for the very sins they conceal within themselves”. “This – the Pope said – is called lack of mercy”.