Pope: Be merciful, do not close the doors of the heart 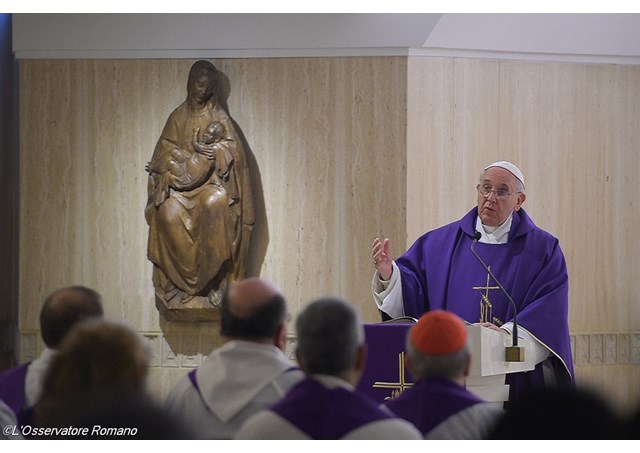 (Vatican Radio)  The Church "is the home of Jesus," a house of mercy that welcomes all, and therefore not a place where Christians should close the doors to those seeking to enter. This was the message at the heart of Pope Francis’ homily Tuesday morning at Mass at the Santa Marta guesthouse in the Vatican.

It is a message that Pope Francis has repeated many times in the past: that of Jesus who opens the doors to anyone who seeks Him and especially to those far from Him.  But, the Pope laments, some Christians shut out those who knock at the door of the Church.  While Christ offers complete mercy, those who profess to believe in Him sometimes fail Him by closing the door on others.

Do not stop those seeking Christ

The Pope's reflection begins with water,  the protagonist of Tuesday’s liturgical readings. Calling it "the water that heals," Francis comments on the Prophet Ezekiel’s description of the trickle of water emerging from the doorway of the temple, and which becomes a raging torrent rich with fish, capable of healing anyone. And, in the Gospel: the water of the pool of Bethesda where a sad paralyzed man lies just on the edge.  The Pope describes him as a little '"lazy" - never having found a way to immerse himself in the moving  waters to seek healing. Instead, Jesus heals him and encourages him to "go on", but this triggers the criticism of the doctors of the law because the healing took place on Saturday. It’s a tale notes the Pope, which occurs "many times" today:

"A man - a woman – who feels sick in the soul, sad, who made many mistakes in life, at a certain time feels that the waters are moving -  the Holy Spirit is moving something - or they hear a word or ... 'Ah, I want to go!' ... And they gather up their courage and go. And how many times in Christian communities today will they find closed doors!  'But you cannot, no, you cannot [come in]. You have sinned and you cannot [come in]. If you want to come, come to Mass on Sunday, but that’s it – that’s all you can do.’ So, what the Holy Spirit creates in the hearts of people, those Christians with their ‘doctors of the law’ mentality, destroy ".

The Church is the house of Jesus

"This pains me," the Pope says, reiterating  that the Church always keeps its doors open:

"It’s Jesus’ home and Jesus welcomes [all]. But not only does He welcome, He goes out to see people just as He went out to find this man. And if people are hurt, what does Jesus do? Scold them because they are hurt? No, He comes and He carries them on His shoulders. And this is called mercy. And when God rebukes his people - 'I desire mercy, not sacrifice!' – He’s talking about this. "

Love is the law

"Who are you,” the Pope continues, “ who shut the door of your heart to a man, a woman, who wants to improve, to return within the people of God - because the Holy Spirit has stirred his or her  heart?" Lent, concludes Francis, helps us to avoid making the same mistake as those who regarded with contempt Jesus’ love towards the paralytic, solely because it was contrary to the law: