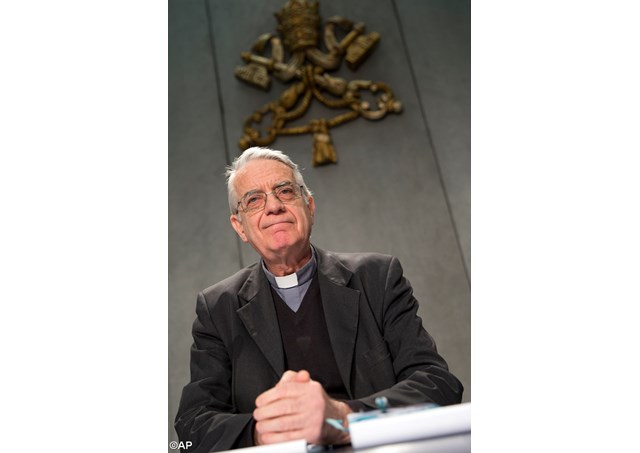 (Vatican Radio)  The head of the Holy See Press Office, Father Federico Lombardi, SJ, on Tuesday spoke about the situation in the Ukraine.

The See is following attentively the situations of crisis in various parts of the world, including the eastern regions of Ukraine. In the presence of an escalation of the conflict that has claimed many innocent victims, the Holy Father Francis has renewed his appeal for peace on several occasions.

By these interventions, while inviting the faithful to pray for those who have been killed and injured as a result of the hostilities, the Pope also underlined the urgency of resuming negotiations as the only possible way out of the logic of mounting accusations and reactions.

Faced with differing interpretations of the Pope’s words, especially those of Wednesday 4 February, I consider it useful to specify that he has always wished to address all the interested parties, trusting in the sincere efforts of each one to implement agreements reached by common consent and invoking the principle of international law, to which the Holy See has referred several times since the beginning of the crisis. As St. John Paul II often repeated, humanity must find the courage to substitute the right to force with the power of law.

The Holy Father joyfully awaits the Ad limina visit of the Ukrainian Episcopate, scheduled for the days 16-21 February. This will constitute a further occasion to meet those brother Bishops, to be directly informed on the situation of that dear country, to console the Church and those who suffer and to evaluate together paths for reconciliation and peace.