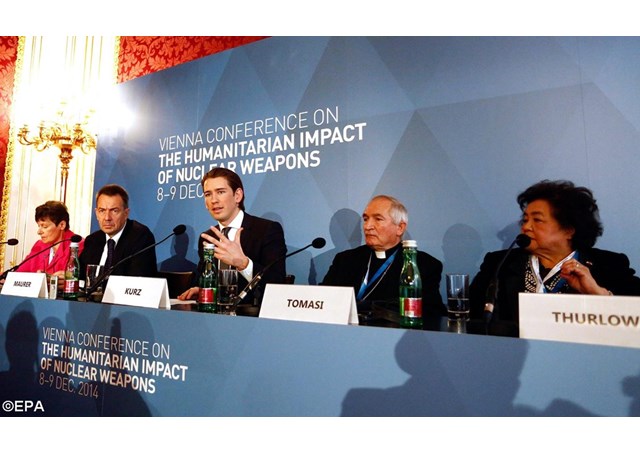 (Vatican Radio) Pope Francis said on Monday “nuclear weapons are a global problem affecting all nations and impacting future generations and the planet that is our home.”

His words were read out at the  Conference on the Humanitarian Impact of Nuclear Weapons which was  taking place in Vienna on December 8-9.

“Nuclear deterrence and the threat of mutually assured destruction cannot be the basis for an ethics of fraternity and peaceful coexistence among peoples and states,” writes Pope Francis. “Then youth of today and tomorrow deserve far more. They deserve a peaceful world order based on the unity of the human family, grounded on respect, cooperation, solidarity and compassion. Now is the time to counter the logic of fear with the ethics of responsibility, and so foster a climate of trust and sincere dialogue.”

The full text of the Message of Pope Francis is below

to His Excellency Mr Sebastian Kurz

of the Republic of Austria

President of the Conference on the Humanitarian Impact of Nuclear Weapons

I am pleased to greet you Mr President, and all the representatives from various nations and international organisations as well as civil society, who are participating in the Vienna Conference on the Humanitarian Impact of Nuclear Weapons.

Nuclear weapons are a global problem affecting all nations and impacting future generations and the planet that is our home. A global ethic is needed if we are to reduce the nuclear threat and work towards nuclear disarmament. Now, more than ever, technological, social and political interdependence urgently calls for an ethic of solidarity (cf John Paul II, Sollicitudo Rei Socialis, 38), which encourages people to work together for a more secure world, and a future that is increasingly rooted in moral values and responsibility on a global scale.

The humanitarian consequences of nuclear weapons are predictable and planetary. While the focus is often placed on nuclear weapons' potential for mass killing, more attention must be given to the "unnecessary suffering" brought on by their use. Military codes and international law, among others, have long banned peoples from inflicting unnecessary suffering. If such suffering is banned in the waging of conventional war, then it should all the more be banned in nuclear conflict. There are those among us who are victims of these weapons; they warn us not to commit the same irreparable mistakes which have devastated populations and creation. I extend warm greetings to the Hibakusha, as well as other victims of nuclear weapons testing who are present at this meeting. I encourage them all to be prophetic voices, calling the human family to a deeper appreciation of beauty, love, cooperation and fraternity, while reminding the world of the risks of nuclear weapons which have the potential to destroy us and civilization.

Nuclear deterrence and the threat of mutually assured destruction cannot be the basis for an ethics of fraternity and peaceful coexistence among peoples and states. Then youth of today and tomorrow deserve far more. They deserve a peaceful world order based on the unity of the human family, grounded on respect, cooperation, solidarity and compassion. Now is the time to counter the logic of fear with the ethics of responsibility, and so foster a climate of trust and sincere dialogue.

Spending on nuclear weapons squanders the wealth of nations. To prioritise such spending is a mistake and a misallocation of resources which would be far better invested in the areas of integral human development, education, health and the fight against extreme poverty. When these resources are squandered, the poor and the weak living on the margins of society pay the price.

The desire for peace, security and stability is one of the deepest longings of the human heart. It is rooted in the Creator who makes all people members of the one human family. This desire can never be satisfied by military means alone, much less the possession of nuclear weapons and other weapons of mass destruction. Peace cannot "be reduced solely to maintain a balance of power between enemies; nor is it brought about by dictatorship" (Gaudium et Spes, 78). Peace must be built on justice, socio-economic development, freedom, respect for fundamental human rights, the participation of all in public affairs and the building of trust between peoples. Pope Paul VI stated this succinctly in his Encyclical Populorum Progressio: "Development is the new name for peace" (76). It is incumbent on us to adopt concrete actions which promote peace and security, while remaining always aware of the limitation of short-sighted approaches to problems of national and international security. We must be profoundly committed to strengthening mutual trust, for only through such trust can true and lasting peace among nations be established (cf John XXIII, Pacem in Terris, 113).

In the context of this Conference, I wish to encourage sincere and open dialogue between parties internal to each nuclear state, between various nuclear states, and between nuclear states and non-nuclear states, This dialogue must be inclusive, involving international organisations, religious communities and civil society, and oriented towards the common good and not the protection of vested interests. "A world without nuclear weapons" is a goal shared by all nationals and echoed by world leaders, as well as the aspiration of millions of men and women. The future and the survival of the human family hinges on moving beyond this ideal and ensuring that it becomes a reality.

I am convinced that the desire for peace and fraternity planted deep in the human heart will bear fruit in concrete ways to ensure that nuclear weapons are banned once and for all, to the benefit of our common home. The security of our own future depends on guaranteeing the peaceful security of others, for if peace, security and stability are not established globally, they will not be enjoyed at all. Individually and collectively , we are responsible for the present and future well-being of our brothers and sisters. It is my great hope that this responsibility will inform our efforts in favour of nuclear disarmament, for a world without nuclear weapons is truly possibly.