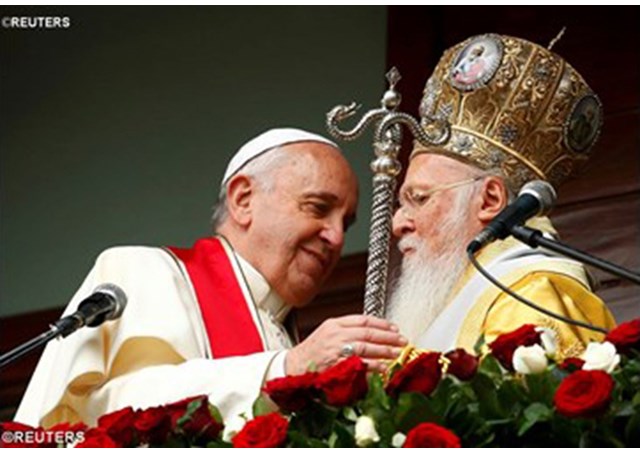 (Vatican Radio) On Sunday November 30th, Feast of Saint  Andrew, Pope Francis highlighted the importance of the  Second Vatican Ecumenical  Council's decree on ecumenism 'Unitatis Redintegratio' dating back to fifty years ago. This is what he said at the end of  an Orthodox celebration of the Divine Liturgy in Istanbul, Pope Francis said “the one thing that the Catholic Church desires and that I seek as Bishop of Rome…is communion with the Orthodox Churches.” :

"By happy coincidence, my visit falls a few days after the fiftieth anniversary of the promulgation of Unitatis Redintegratio, the Second Vatican Council’s Decree on Christian Unity. This is a fundamental document which opened new avenues for encounter between Catholics and their brothers and sisters of other Churches and ecclesial communities.

In particular, in that Decree the Catholic Church acknowledges that the Orthodox Churches “possess true sacraments, above all – by apostolic succession – the priesthood and the Eucharist, whereby they are still joined to us in closest intimacy” (15). The Decree goes on to state that in order to guard faithfully the fullness of the Christian tradition and to bring to fulfilment the reconciliation of Eastern and Western Christians, it is of the greatest importance to preserve and support the rich patrimony of the Eastern Churches. This regards not only their liturgical and spiritual traditions, but also their canonical disciplines, sanctioned as they are by the Fathers and by Councils, which regulate the lives of these Churches (cf. 15-16).

Listen to historian Professor Norman Tanner SJ in an interview with Veronica Scarisbrick:

The programme begins with a Vatican Radio sound clip from November 21st 1964 when this and other Council documents were promulgated and goes on to touch on how 'Unitatis Redintegratio'  received an overwhelmingly majority vote despite having previously been the object of considerable debate. As Professor Tanner highlights in his book 'The Councils of the Church’ the decree on ecumenism was particularly important and represented a major breakthrough: “In view of the strong language of previous centuries against schism and heresy, it is not surprising that the decree was hotly debated, with many unwilling to break radically from the traditional language. In the end, however, the decree showed much generosity. It accepts that Catholics must take their share of blame for the divisions among Christians and that the living cannot be blamed for the sins of their ancestors. Other Christians are spoken of as "brothers and sisters," and the unity that already exists is emphasized...the decree recognizes however, that obstacles remain to full communion and it urges Catholics to do their best to overcome them....”