Pope Francis receives CD of the music of the 2013 Conclave 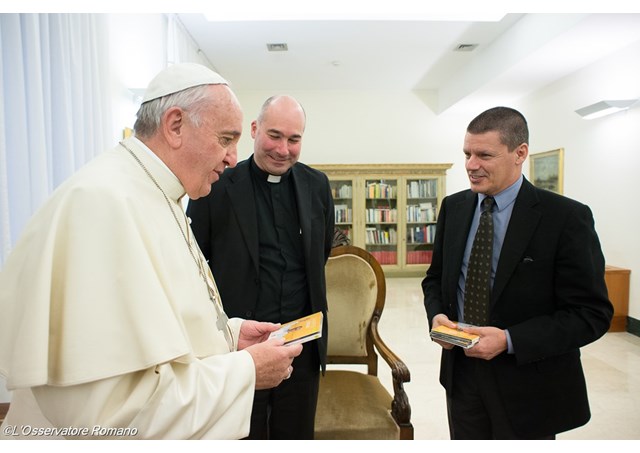 (Vatican Radio) The Director of the Sistine Chapel, Msgr. Massimo Palombella on Wednesday presented Pope Francis with a CD: “Habemus Papam. La musica del Conclave.” The CD contains the music used during the liturgical ceremonies surrounding the election of Pope Francis: The “Missa pro eligendo Pontifice”, the Veni Creator used during the entrance into the Sistine Chapel, the music of the Mass celebrated with the Cardinals the day after his election, the music of the Inaugural Mass of Pope Francis, and, for the first time, the 11 minutes containing the announcement “Habemus Papam” and the first words of Pope Francis on the evening of March 13, 2013.

In an interview with the Italian Catholic newspaper Avvenire, Msgr. Palombella said he wanted to have the real experience of the events.

“There is a cough, or a plane flying over St. Peter’s Square…it makes it seem as if you are there live,” he said.

The CD is the first of a planned series produced with Deutsche Grammophon. Others planned include the canonization of Popes St. John XXIII and John Paul II, as well as a CD of the repertoire of the Sistine Chapel Choir produced in a studio setting.