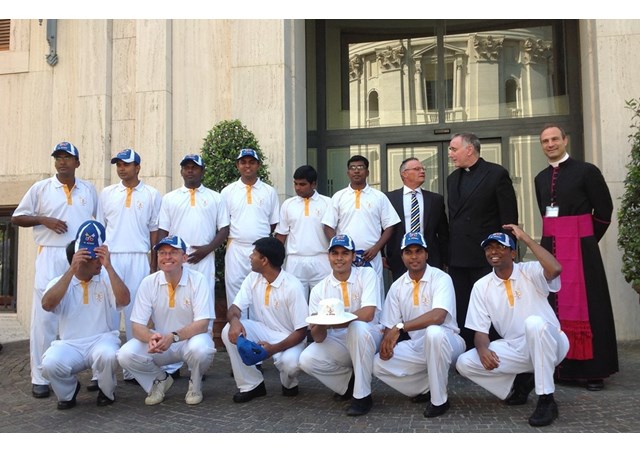 (Vatican Radio) Pope Francis met in the Vatican on Tuesday with members of St Peter’s Cricket Club who are preparing for their ‘Light of Faith Tour’ to England. The Club, which was set up last year under the auspices of the Pontifical Council for Culture, is comprised mainly of seminarians from India and Sri Lanka who will be challenging a Church of England team in Canterbury on Friday September 19th.

After greeting the players and signing a cricket bat for them, Pope Francis blessed the team and wished them well for this first tour which aims to forge deeper relations between young Anglican and Catholic men in training for the priesthood. Entry to the game is free but all funds raised will go to support the ecumenical Global Freedom Network which works for the eradication of slavery and human trafficking.

Team captain Fr Tony Currer also heads the desk for relations with Anglicans and Methodists at the Pontifical Council for Promoting Christian Unity. Philippa HItchen caught up with him at the papal audience to find out more about the goals of this unusual sporting encounter…..

"I think it's very important for all of us to share a moment of prayer with the Holy Father like that.....it's a great experience for the team and a very joyful occasion....I hope they perform as well as they can and enjoy playing in some of these great venues, Windsor Castle, Canterbury.....

We'll be at the shrine of Thomas Becket, we'll pray Evensong in Canterbury Cathedral....the shrine to Becket is where Pope John Paul II prayed with Robert Runcie, the Archbishop of Canterbury and we'll also be in Westminster Abbey where Pope Benedict prayed with Archbishop Rowan Williams, so all of these are important ecumenical sites that we'll be visiting....those were moments that opened up relations for Catholics and Anglicans and that we pray together is a living out and continuation of that.....and sport is the medium for bringing us together."