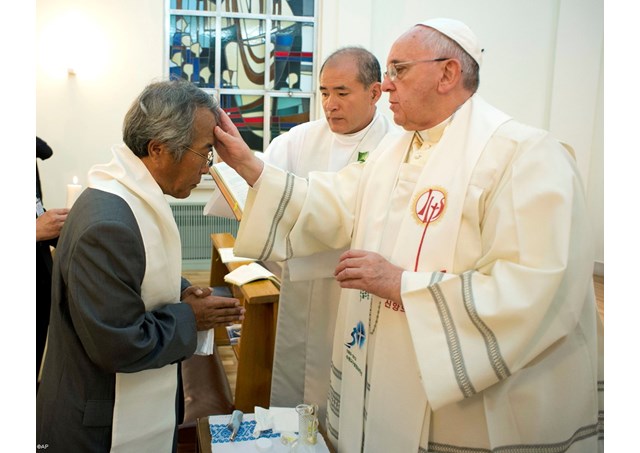 (Vatican Radio)  Pope Francis on Sunday baptized a father of one of the children who was killed in South Korea’s ferry disaster last April.   Holy See’s spokesman Fr. Federico Lombardi, who is accompanying the Pope in Korea,  said the Baptism of Lee Ho Jin took place at 7 am  at the Apostolic Nunciature in Seoul.  “He is the father of one of the young people who died in the ferry disaster of Sewol, and who during a meeting in Daejeon with survivors and families of victims of the tragedy had requested the Pope to baptize him,” Fr. Lombardi said in a statement.  Lee was accompanied by a son and a daughter and the priest who introduced him to the Pope at Daejeon.  Lee’s godfather is a lay employee of  the Nunciature.  Fr. Lombardi said the baptism was a simple ceremony and led by Korean Jesuit Fr. John Chong Che-chon who is acting as an interpreter to the Pope during this visit.   The Holy Father personally baptized Lee pouring water on him and also administered the sacrament of Confirmation. Lee chose Francis as his baptismal name.  “The Pope was happy to be able to participate in the ministry of the  administration of Baptism to an adult of the Korean Church,” Fr. Lombardi added.