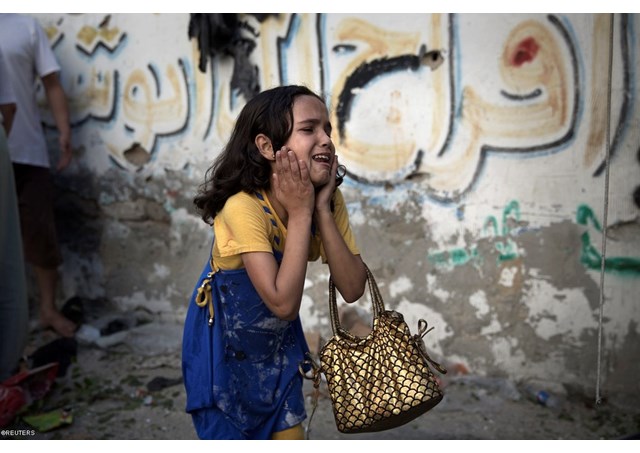 (Vatican Radio) Caritas Jerusalem is making a dramatic appeal for an end to the Israeli-Hamas conflict in Gaza as the death toll climbs to more than 1300 people – overwhelmingly Palestinian.  Caritas Jerusalem Director Fr. Raed Abusahliah says the conflict has also claimed its first Christian victim.

An Israeli missile strike on Sunday hit the house of the Ayyads, a Christian family living in Gaza “without any previous notice and we don’t even know why it was attacked,” says Fr. Raed. “The whole house was completely destroyed and the mother, who is 60 years old, died immediately.  And her son, who is thirty years old, is severely injured. Two of his legs were cut and he has burns on 70% of his body. And damages in his head.  So he is in a very critical condition.”

Caritas has been negotiating with Israeli authorities to allow Ayyad’s transfer from Gaza to St. Joseph’s hospital in Jerusalem for treatment but so far, no authorization has been forthcoming, he says.  “He is risking his life.  Doctors said if he doesn’t go out from Gaza immediately, he has only a 20% chance to live.” A first attempt to evacuate him failed after an Israeli strike on the hospital where he is receiving care.

The mother was buried three hours after her death Sunday “because there are no places in the hospitals and because her body was torn completely. So she was buried in the Greek Orthodox church of Gaza.”

Gaza’s 1300 Christians are made up of some 310 families.  “All of them are concentrated in the city of Gaza, Fr. Raed explains.  “Not in the other refugee camps or cities of Gaza.  So they are in the middle of the conflict. The whole situation is difficult:  no electricity, no water, day and night bombardments, missiles from both sides.  So it is really, really terrible.  They can’t go out even if they would like to.  Even if they can go out, where can they go? The Egyptian crossing is closed, the Israeli side is closed so they are trapped there.”

Churches have opened their doors to displaced people, giving refuge to as many people as they can, Fr. Raed notes.  “In our Holy Family school the number of refugees was days ago, 700.  Today, we reached 1,100 people living there.  In the Greek Orthodox church, days ago the number was 1,100 people.  Now, it is 1,900 people… They have “nothing, nothing at all to offer them.”

“Churches are trying to help them, providing them with food, with gasoline, with milk for their children.  We in Caritas tried to provide hot meals for the whole week and this is the last day (since Caritas' most recent appeal for funds) and we are trying since this morning to get more funds for another week. Because we expected that the war will end and we didn’t expect that it would last until today.”

Caritas and Catholic Relief Services are currently trying to help locate gasoline “if they can find it” for the Anglican-run Al Ahli hospital in Gaza. Fr. Raed says the hospital’s director called him two days ago to say their supply of gasoline was seriously low and may not be enough to keep their generators running. If that happens, Fr. Raed warns, “the generators in the whole hospital will stop which means all the patients will suffer and maybe lose their lives.”

Caritas is planning future aid projects including social interventions and food distribution plus raising funds to help 3,000 families “who completely lost their belongings and houses “ to survive “for one or two months.”  Caritas is also on the ground offering medical care  through its volunteers and land and mobile clinics.

80% of those killed in the conflict so far, explains Fr. Raed, are civilians and more than 7,000 people have been injured.  Thousands of homes have been “completely destroyed and more than 30,000 partially damaged.  They have to stop the war and save lives of innocent people.  I say, and I’m not afraid to say it, these people who’ve died from both sides – the Israeli side, especially among soldiers – are human beings.  They are not numbers!  Unfortunately now they are counting (the victims): we reached 1,300 people (who’ve) died; 53 from the Israeli side…this is diabolic!  Really, these are human beings.  They have names; they have families.  They have parents; they are relatives.  And every human being is important.”

“I am describing the situation but to see the photos and hear these stories, it’s really beyond your imagination!" says a distraught Fr. Raed. "It’s like in the Second World War which means (there’s) whole(sale) destruction.  They are targeting everybody: civilians, women, children and hospitals.”