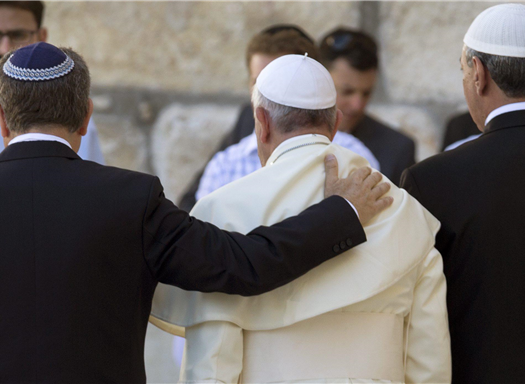 (Vatican Radio)  In a moving eulogy to the victims of the Shoah, pronounced – almost prayed – in the Memorial Hall of Yad Vashem, Pope Francis called for the mercy of God to forgive man’s shame for having putting himself in God’s place and having offered in sacrifice his brothers and sisters to himself.

Standing before the memorial to the 6 million Jews killed in the Nazi death camps of World War II he said “Here we are, Lord, shamed by what man, created in your own image and likeness, was capable of doing".

The Holy Father was joined by rabbis, the Israeli President Shimon Peres and Prime Minister Benjamin Netanyahu. The ceremony – his fourth appointment in a busy morning schedule - was poignant. Pope Francis, visibly moved , approached the eternal flame burning in the room, then in front of the center stone, laid a wreath of flowers. He then greeted some survivors of the concentration camps one by one - kissing their hands. His greeting to them followed, which we re-publish in its entirety below.

Before, Pope Francis had gone to the Western Wall (the "Wailing Wall"), where he prayed in silence , placing his hand on the ancient stones of the foundation of the temple of Herod. There, as he predecessors St. John Paul II and Benedict XVI had done before him, he inserted a hand written prayer between the cracks of the stones - the Our Father in Spanish. Immediately afterwards, the Holy Father moved to warmly embrace the Argentinian Rabbi and Muslim leader from Buenos Aires – his longtime friends – whom he had asked to accompany him on this pilgrimage in a warm and moving moment for all three men.

He also signed the Western Wall Book of Honor. The dedication begins by citing Psalm 121: " I rejoiced when they said to me, “Let us go to the house of the LORD'. And now our feet are standing within your gates, Jerusalem" And then he added : " With these sentiments of joy to my older brothers , I have come now and I asked the Lord for the grace of peace" – prompting the Chief Rabbi of Israel, David Lau, to comment on Pope Franc’s familiarity with the Jewish tradition.

The Pope began the third day of his visit among on Temple Mount.  The pope arrived at 8.15 am at the Dome of the Rock, the third holiest site for Muslims (who venerate the rock from which Mohammed ascended to heaven) and where Jews believe the sacrifice of Isaac took place. The pontiff was greeted by Prince Ghazi bin Muhammad, the Jordanian royal family is the guardian of the holy places of Islam in Jerusalem.

In the meeting with the Muslim community, the Holy Father warned against abusing the name of God through violence and called for mutual respect among believers of different faiths as brothers as sisters. He said Muslims, Jews and Christians must live the spiritual attitude of Abraham, practicing peace, justice and mercy. "May we learn to understand the sufferings of others!".  "May we work for peace and justice"; "may we respect and love one another as brothers and sisters" and "May no one abuse the name of God through violence!": this was Pope Francis' heartfelt appeal to the Muslim community in his address, to the Grand Mufti Sheikh Muhammad Ahmad Hussein and the President of the Supreme Muslim Council.