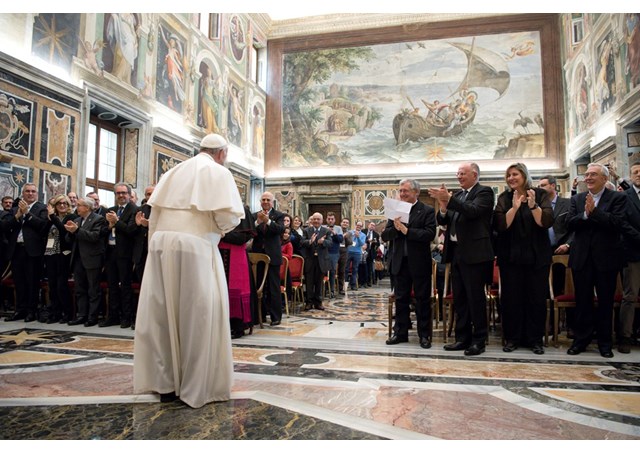 Pope Francis has urged that "news be communicated with serenity, precision and completeness, using a calm ‎language in favour of a fruitful reflection; thoughtful and clear words, which reject the tempers of ‎allusive, clamorous and ambiguous speech,  Pope Francis told representatives of Italian periodicals on Saturday.  “It is important that the criteria of judgment and information are offered patiently and methodically so that ‎public opinion is able to understand and discern, and is not stunned and disoriented,” the was some 350 members of the Union of  Italian Periodical Press (USPI) and the Italian Federation of Catholic Weeklies (FISC) who met him in the Vatican.

The Pope told them that they have a mission to inform properly, to offer everyone a version of the facts as close as possible to reality.  “Your free and responsible voice,” he said, “is fundamental for the growth of any society that wants to be called democratic, so that a continuous exchange of ideas and a profitable debate based on real and correctly reported data are assured.

The Pope observed that in our time that is often dominated by the anxiety for speed, by the urge for sensationalism lacking in precision and completeness, by overheated emotions in the place of thoughtful reflection, ‎the need for reliable information is urgently felt, with verified data and news, that does not aim to ‎amaze and excite, but rather aims to create in readers a healthy critical sense, which allows ‎them to make appropriate questions and reach justified conclusions.‎

Respect for dignity of persons

The Holy father also urged that the right to information and the dignity of every single human person be “scrupulously respected” so no one risks being damaged in the absence of real and responsible circumstantial evidence. He said, “There is no need to fall into the ‘sins of communications’: misinformation, that is saying only a part which is calumny and which is sensational, or defamation that seeks out things past and old and bringing them to light today.”  “They are very grave sins that damage the heart of the journalist and damage the people,”  the Pope added.