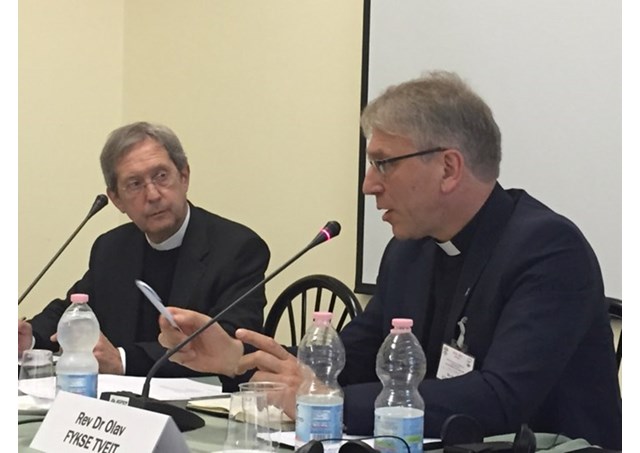 (Vatican Radio) The Vatican and the World Council of Churches on Friday concluded a three day meeting exploring ways of combating xenophobia that is often provoked and exploited by populist policies.

A recent UNHCR report spoke of responses to the global migration and refugee crisis as marked by “toxic” fear rooted in xenophobia and encouraged by populist politics.

The Rome meeting was jointly hosted by the WCC and the Vatican’s office for Integral Human Development, in collaboration with the Pontifical Council for Promoting Christian Unity. Among its goals was the planning of a world conference on these issues, to be held from May 21st to 24th next year.

Among the key speakers at this week’s meeting was the General Secretary of the WCC, Rev Olav Fykse Tveit, who talked to Philippa Hitchen about its aims and its achievements..

The WCC leader described the encounter as a “very useful and significant workshop to dig a bit deeper” into the problems of xenophobia, as an expression of populism, as well as its links to racism, conflict and violence in countries around the world.

He noted that xenophobia is a complex phenomenon connected to migration, but also to recent economic developments, as people fear losing their jobs and financial stability.

Rev. Fykse Tveit said it’s vital to understand the many reasons for migration, including those fleeing from wars, and to avoid making migrants “scapegoats for everything that creates the problems of the world today”.

Another important point, he said, is to realise how much has already been done “to develop Christian values and attitudes” towards “the stranger”. He noted how St Paul’s letter to the Romans dealt with the challenges of “being one in the Church when we are so different”.

While such news rarely makes the headlines, the Lutheran pastor said there has been a “strong mobilisation in local Churches”, as grassroots communities respond to the challenges of “how do we relate to our new neighbour, to the new classmate in school?”

Rev Fykse Tveit said it’s important to develop a “realistic” message that takes into account people’s fears, but that also draws on Christian values to encourage a change in people’s behaviours, approaches, attitudes.

The planned world conference next May, he concluded, will work on deepening this analysis and learning from each other’s experiences, but also on a strategy for sharing this message by forging relationships with all people of good will.  As Churches, he said, “we know the problems of those who have to find a new home”, as well as “the challenges for those who receive them, but we know also a lot about the capacities of human beings to find new ways of living together, and the values that can inspire us to do so”.