Pope appeals for wisdom and prudence to prevail over Jerusalem 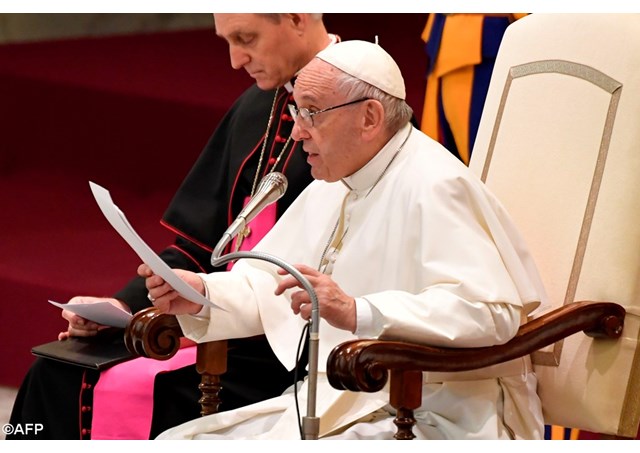 (Vatican Radio) Pope Francis has appealed for respect for Jerusalem’s status quo according to the pertinent United Nations Resolutions regarding the city.

Speaking after his catechesis to the crowds in the Paul VI Hall during the weekly General Audience, the Pope said “my thoughts go to Jerusalem and I cannot keep silent my deep concern for the situation that has been created in the past days”.

Listen to the report by Philippa Hitchen:

“At the same time, he continued, I would like to make a heartfelt appeal for everyone’s commitment to respect the city’s status quo, in conformity with the pertinent United Nations Resolutions”.

The Pope’s words of concern came on Wednesday ahead of an expected announcement by US President Trump to recognize Jerusalem as Israel’s capital.  Arab leaders have warned the move will create turmoil and trigger violence.

Describing Jerusalem as unique city which is “Holy for Jews, Christians and Muslims, who venerate the Holy Sites of their respective religions”, the Pope said it has a special vocation for peace.

“I pray to the Lord that its identity is preserved and strengthened for the benefit of the Holy Land, the Middle East and the whole world and that wisdom and prudence prevail to prevent new elements of tension from being added to a global context already convulsed by so many cruel conflicts” he said.

Earlier in the morning the Pope called for dialogue that respects the rights of everyone in the Holy Land and expressed his hope for "peace and prosperity" for the Palestinian people during a previously scheduled meeting with a Palestinian delegation of religious and intellectual leaders in the Vatican.