Pope to Religious, no to gossip, embrace joy 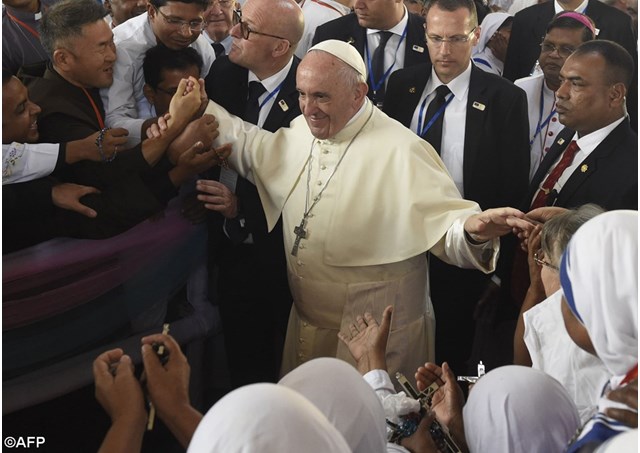 (Vatican Radio) Pope Francis on the last day of his visit to Bangladesh addressed  priests, religious, consecrated Men and Women, and seminarians at the Holy Rosary Church in Dhaka, telling them to avoid gossip and embrace a spirit of joy.

The scene was the Holy Rosary Church in Dhaka; the audience was pews full of priests, religious, consecrated men and women, and seminarians who had all come to hear the Pope’s speak. The Holy Father did just that; putting his prepared remarks aside, he told those gathered that he wanted to speak to them from the heart.

Drawing inspiration from scripture, Pope Francis quoted from the prophet Isaiah with the phrase, "in those days, from the house of Israel will be born a small shoot, it will grow and grow, and with the Spirit of God, will generate the spirit of wisdom, intelligence, science, knowledge.”

Taking this image, the Pope explained that God is the sower and we are the plant that he causes to grow.

Then the Holy Father asked, “how can we water this seed? Indeed, he continued, how do we take care of the vocation we have received? The answer, Pope Francis said was “human tenderness”, adding that if this is missing in our communities, in our priests, and  in our parishes, the bud will remain small, will not grow and in the end will wilt.

The Pope said, in response to a question, that in order to discern if one’s vocation is growing in a healthy way, it was important to pray.

During his off the cuff remarks, Pope Francis warned against division in religious communities and again reiterated the detrimental effect of gossip which he likened to terrorism.

He went on to suggest that, “when you want to talk bad about a person, bite your tongue: the worst thing that can happen, he said, is that you hurt yourself but you will not hurt another brother or sister.”

Finally, the Pope urged those present “to keep a spirit of joy”, saying without joy we cannot serve God.