Pope Francis is in Bangladesh 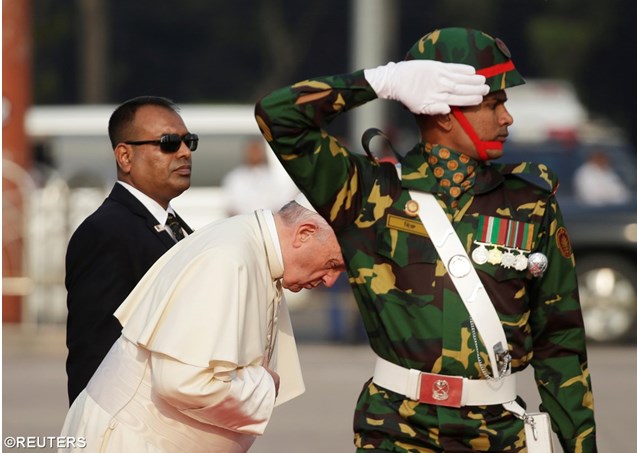 (Vatican Radio) Pope Francis has arrived in Bangladesh. The papal plane that departed from Myanmar – where the first leg of his 21st apostolic journey took place – arrived shortly after 10am local time at Dhaka’s international airport.

Bangladesh President Abdul Hamid and a delegation of political and religious authorities were on the tarmac to meet him together with a group of children who welcomed him with flowers, singing and dancing.

After the welcome ceremony the Pope visited the National Martyr’s Memorial and Bangabadhu Memorial Museum.

Coming up in the afternoon is his meeting with authorities, civil society leaders and the diplomatic corps.

In his message to the President of Myanmar prior to his departure, Pope Francis expressed his appreciation for the welcome he received by the Institutions and thanked “the beloved people of Myanmar for their warm embrace”.

Before departing Pope Francis gave the Archbishop’s Residence in Yangon a sculpture representing Saint Francis talking to the birds: a symbol of brotherhood between mankind and creation,