Pope Francis on need to respect all Myanmar's ethnic groups 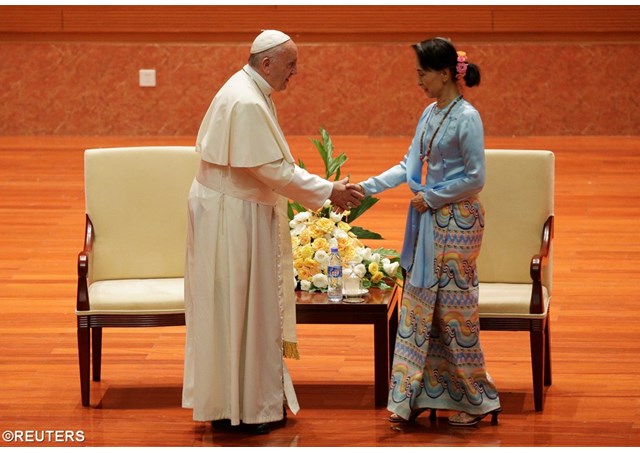 (Vatican Radio) Pope Francis began his first full day in Myanmar on Tuesday with an unscheduled encounter at the Archbishop’s House, meeting with a group of 17 leaders from the different religious traditions present in the country.

Following that encounter, he travelled by plane up to the capital, Nay Pyi Taw, where he met President Htin Kyaw and Burmese leader, Aung San Suu Kyi, before addressing diplomats and government leaders gathered at an international convention centre.

Philippa Hitchen is in Myanmar following this papal visit and takes a closer look at the pope’s words to the nation’s leaders...

Inside the convention centre sat a colourful mix of military men in green uniforms, cardinals and bishops, diplomats and politicians in traditional coloured sarongs and flip flops. A row of children in ethnic costumes flanked the pope and ‘The Lady’ as they took their place on stage.

Unsurprisingly, in a country still struggling to emerge from half a century of military dictatorship, the pope’s words were firmly focused on dialogue, reconciliation and respect for human rights.

He spoke plainly about the suffering people have endured, “and continue to suffer, from civil conflict and hostilities”, without mentioning by name the different states where government troops are fighting against armed independence groups. He reiterated the need to respect the identity of each ethnic group, adding “none excluded”, and he insisted that conflicts must be resolved “through dialogue, not the use of force”.

In her words to the pope, Aung San Suu Kyi talked directly of the challenges in Rakhine state, which has been the focus of such intense criticism from the international community. She said the government is seeking to address the many social, economic and political problems there, highlighting the need to rebuilt trust and cooperation. Among the Muslim leaders, whom the pope met at the earlier interreligious encounter in Yangon, was a member of the advisory commission for the Rakhine, chaired by former UN secretary general Kofi Annan.

But it’s not just the Muslins fleeing across the northern border into Bangladesh, who have suffered from violent repression. During a visit to the predominantly Christian Kachin state, ahead of the pope’s arrival, I met Catholic families in one of the many camps for internally displaced people, whose villages were destroyed and who survive on aid from international organisations. The Church runs education and health programmes, trying to improve the desperate living conditions, but all agree there can be no real development without peace between the warring parties.

Healing of wounds a paramount priority

The healing of the wounds of war, Pope Francis insisted in his first speech here, “must be a paramount political and spiritual priority”, adding that the country’s religious communities “have a privileged role to play” in this difficult task. Of the 16 Catholic dioceses in Myanmar, 15 primarily serve the many ethnic minorities. Church leaders will be hoping the politicians take his words to heart, increasing efforts towards real democracy and equal rights for all.