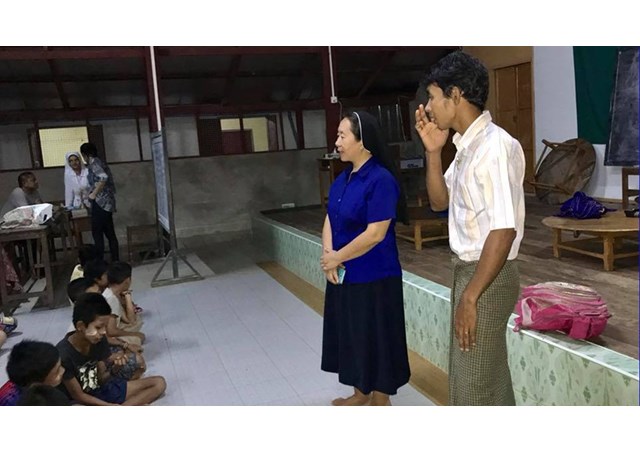 (Vatican Radio) Pope Francis arrived in Myanmar on Monday, for the first papal visit to the nation, which has recently emerged from over a half a century of military rule.

When the army first took power in 1962, all foreign missionaries were expelled; but since then, a number of religious congregations have returned to the country to set up some much needed health, education, and development programmes.

Ahead of the Pope’s visit, Vatican Radio’s Philippa Hitchen spent some time in Myanmar to report on the ‘hidden’ work being carried out by Catholic women in the country today:

It’s a four hour drive north of Yangon to reach the village of Magyikwin. The roads leading out of the city are heavily congested, with children weaving in and out of the cars and trucks, hawking sweets, drinks and garlands of sweet-smelling jasmine flowers. With the liberalisation of the economy over the last few years, the number of cars on the roads has spiralled, filling the air with noxious fumes and the constant cacophony of beeping horns.

Out of town, however, the pace slows and bicycles or motorbikes become the most common mode of transport. The road winds its way northwards through paddy fields and lush vegetation, interspersed by huddles of wooden huts, with dirt tracks leading off towards isolated village communities. Each village is marked by the presence of a pagoda, with golden pointed domes rising above the trees and dominating the surrounding landscape.

Until quite recently, Magyikwin village was cut off from the main road by a river which floods each rainy season. One small boat was the only way across until the government built a bridge linking the main road to the potholed track leading into village. When the Good Shepherd Sisters arrived over 40 years ago, the place was renowned for its high alcohol consumption and the fighting that regularly broke out as a result. Malnutrition, child mortality and illiteracy rates were high, with people largely living a hand-to-mouth existence.

The sisters set about building a small church and starting classes for the children, offering them a meal as well to encourage parents to enrol their offspring. Today there are over 160 children attending early morning and evening classes to supplement the education they receive in the government run school. There is no electricity in the village, but the sisters use solar power and an ancient generator for light to study by. Improved education means many kids now pass 10th grade exams, gaining access to university and the prospect of decent job opportunities.

Sr Maria Goretti Lwin and a young trainee teacher, Francis Lwin, introduce us to a class of teenagers from Catholic, Baptist and Buddhist families. They’re especially proud of the children’s singing skills and are busy preparing for a Christmas choir competition in Yangon.

The sisters have also started microcredit schemes, loaning money to buy pigs for breeding and selling the piglets at the local market. They’ve also begun asking parents to contribute to their children’s education, paying whatever they can afford, to encourage budgeting and a move away from a charity handout mentality. At the same time, they’ve started taking in a handful of girls (and one boy) from high risk families, where children are especially vulnerable to violence, abuse or human trafficking.

Pictures of Good Shepherd Congregation’s foundress, Rose Virginie Pellettier, hang on the classroom walls, next to images of popular Burmese leader Aung San Suu Kyi, and these sisters are rightly proud of the progress that’s been achieved in the village over recent decades. Under the watchful eye of their foundress, they carry on the work that she started, almost two centuries ago: to provide support for vulnerable women and girls, and, in the process, bring dignity and hope to whole communities.