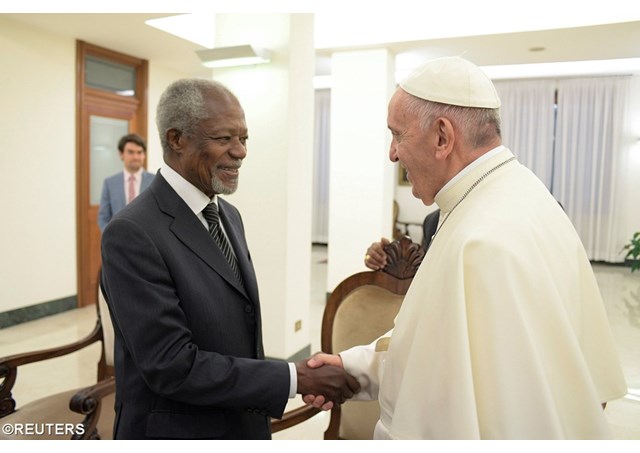 (Vatican Radio) Pope Francis leaves for Myanmar on Sunday at the start of a first ever visit to the country, formerly known as Burma. The nation, which recently emerged from over half a century of military rule, includes over 130 different ethnic groups, many of which have been in conflict with the government for decades.

Last August, following an attack on a police post in northern Rakhine state, the military led a campaign of bombing and burning villages, causing hundreds of thousands of Muslims to flee across the border into Bangladesh.

Former U.N. Secretary General Kofi Annan met earlier this month with Pope Francis to discuss global concerns, including the humanitarian crisis in Myanmar. After the audience, he talked to Philippa Hitchen about his hopes for a return to peace and stability in Rakhine state, as well as his expectations for the pope’s visit to the country…..

Speaking of his role as chair of an advisory commission on Myanmar’s northern Rakhine state, Annan says it came up with recommendations which “if applied in the manner we hope, could lead to resolving some of the root causes” of the crisis. The government has accepted the report, as well as other organisations, he says, so “we need to build a road map, based on the recommendations, and work together to implement it”.

Whatever is happening on the ground, he adds, “we need to stop the violence, stop the exodus, we need to calm the situation and get humanitarian workers to reach those in need and then work with government to create a secure environment”

Press and media should be allowed in to the region, Annan insists, and the government “should ensure that when these people return from Bangladesh there is security and they will have the assistance they need to rebuild their homes and return to their villages”. The report recommends a register of all those who’ve moved into Bangladesh to be used as the basis of getting them back home.

The conflict, he continues, is a mix of political, religious, historic and land issues, and in this context, the pope’s message “of reconciliation, his message of compassion and empathy, of caring for your brother or sister is extremely important”.

Annan says during the papal visit the Holy Father will be “giving a voice to the voiceless”, but he’ll also be reasoning with the leaders in the Myanmar, as well as other groups there. In today’s interconnected, pluralistic world, he says, we need to “celebrate our diversity and accept that what unites us is much more important than what divides us”, rather than stressing “divisions and hatred that some feel”. He says he hopes the pope’s message in Myanmar “resonates loud and clear”.