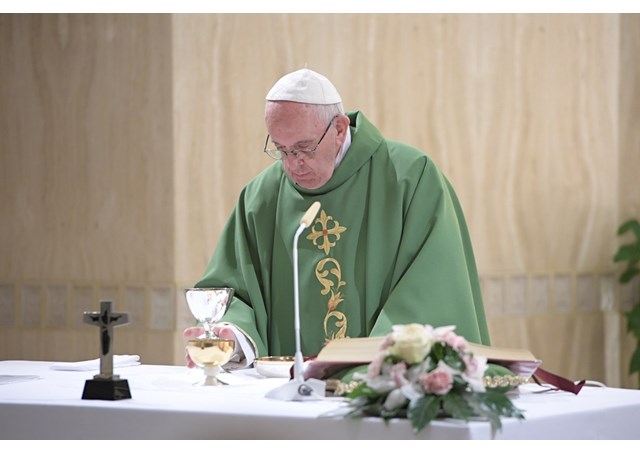 (Vatican Radio) Removing freedom, erasing memory, indoctrinating young people are the three indicators of cultural and ideological colonization throughout the ages. Those were the Pope's words as he returned to the subject of cultural and ideological colonization this Thursday morning during his homily at the Casa Santa Marta, inspired once again by the readings of the week, which recount the persecution of King Antiochus Epiphanes against the Maccabees who are faithful to the law of the Fathers.

Look what happens to the people of God, "said Pope Francis," every time there is a new dictatorship on Earth that is a cultural or ideological colonization. "Think, the Pope noted, without making names, to what the dictatorships of the last century did in Europe and the indoctrination in schools that have arisen:”

"Freedom is taken away, history, people’s memory is deconstructed, and an educational system is imposed on young people. Everyone: Everyone does this. Even with kid gloves on, so: I know a country, a nation that asks for a loan, '(and the answer is)  “I will give you the loan, but [in return] you, in your schools, have to teach this, and this, and this,'; books that have erased all that God has created and how he has created it. They erase the differences, eliminate history: from today you have to start thinking in this way. Those who do not think like this are cast aside, even persecuted. "

This has happened even in Europe, the Pope commented, where "those who opposed genocidal dictatorships were persecuted", were threatened, deprived of freedom, which then corresponds to "another form of torture." And along with freedom, ideological and cultural colonizations also eliminate  memory, reducing it to "fables", "lies," old things. " Then, recalling the figure of the Maccabei's mother who exhorts her children to stand up to martyrdom, the Pope emphasized the unique role of women in the custody of memory and historical roots:

"Preserving memory: the memory of salvation, the memory of God's people, that memory that strengthened the faith of a people persecuted by this ideological-cultural colonization. Memory is the one thing that helps us triumph over every perverse education system. To remember. Remembering the values, remembering the History, remembering the things we learned. And then, there are Mothers.

The "feminine tenderness" and the "manly courage" of the Maccabees mother who renders the historical roots of the language of the Fathers strong in defense of her children and of the People of God, makes us think, said the Pope that "only the strength of women is capable of resisting cultural colonization. " They are the mothers and women, the guardians of memory, of their native dialect , "able to defend the history of a people," and, moreover, the Pope added, to "convey the faith" which "theologians will be able to explain".

"The people of God continued on by the strength of so many valiant women who have been able to give their children faith, and only they - mothers - can convey faith in a native dialect. Let the Lord always give us grace in the Church to have memory, not to forget the native language of fathers, and to have courageous women. "