Pope: Franciscan "littleness" is a place of encounter 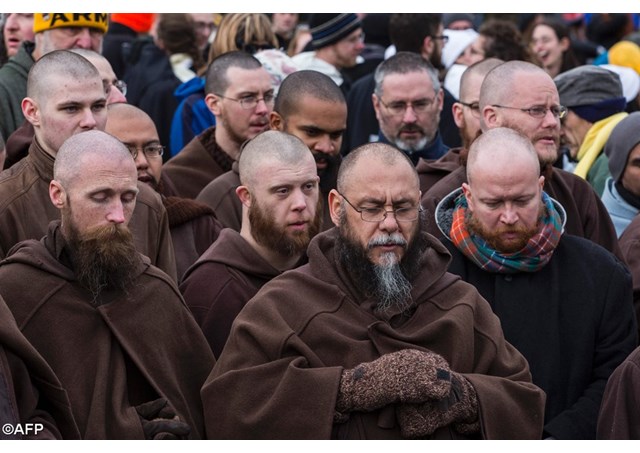 (Vatican Radio) Pope Francis met with members of the Franciscan family on Thursday, receiving members of the First Order and of the Third Order Regulars in an audience in the Clementine Hall at the Vatican.

In his address to the Franciscans, the Holy Father emphasized the Order’s proper name, the Order of Friars Minor. The word ‘minor’ is an essential aspect of their religious life, he said; and so that they are not simply religious brothers, but “minor” brothers.

Saint Francis’ inspiration to name his religious brothers “friars minor,”  the Pope said, came from his desire to make Christ and the Gospel the foundation of his life. Although not lacking ascetic and social motivations, it comes primarily from a contemplation of Christ, the Son of God, who “though He was rich, made himself poor.” The logic of “spoliation” was literally lived out by St Francis when he stripped himself completely of all earthly goods, in order to give himself entirely to God.

The Pope said the life of Saint Francis was marked by this encounter with God who had made Himself poor: “a humble and hidden presence that the Little Poor Man of Assisi [the “Poverello”] adored and contemplated in the Incarnation, in the Cross and in the Eucharist.”

This typically Franciscan “littleness” [It.: “minorità”], he told the Franciscans, serves them as a place of encounter and communion with God; with their religious brothers and with all men and women; and with all of creation.

A place of encounter with God

This littleness has a special place in the Franciscan’s relationship with God, which must be humble and confident, like that of a child; but also aware of one’s sinfulness like the publican in the Gospel. One particular aspect of this relationship is the “spirituality of restitution” to God. We must recognize that every good we receive comes from God, the supreme Good, and that all good things must be restored to Him; and “we do this through praise and we do this when we live according to the evangelical logic of the gift, that leads us to go out of ourselves to encounter others and welcome them into our lives.”

A place of encounter with the brothers, and with all men and women

This leads to the second kind of encounter, with other people. Pope Francis said this encounter, for religious, is lived out primarily in the relationship with the other religious brothers, who are given to us as a gift from God. In these relationships, he said, every attitude of superiority must be eradicated; instead, they must be marked by mutual respect, understanding, charity and mercy.

Franciscan “littleness” must also be lived, the Pope said, in the relationships with all men and women in the world. These relations too, he said, must be free of every attitude of superiority. Pope Francis warned especially that when the Friars Minor perform their work in favour of the “smallest,” those who are excluded and considered “the least,” it must never be done from a “pedestal of superiority” that would tend to drive people away.

“Open your hearts and embrace the lepers of our times!” Pope Francis said, “And, after recognizing the mercy the Lord has used in your regard, extend that mercy to them, as Saint Francis did; and, like him, learn to be ‘sick with the sick; afflicted with the afflicted.’” In this way, he said, Franciscan littleness will not remain some vague sentiment, but will have a profound effect on their lives.

A place of encounter with creation

Finally, the Pope said, Franciscan “littleness” is a place of encounter with all of creation. Saint Francis described creation as a sister, or a beautiful mother; but, the Pope said, this sister and mother “is rebelling because she feels mistreated.” He asked the Franciscans to enter into a dialogue “with all of creation,” both praising God for His creation, and having a particular care for it. “Collaborate with various initiatives for the care of our common home,” the Pope said, “always keeping in mind the strict relationship that exists between the poor and the fragility of the planet, between the economy, development, care for creation, and the option for the poor.”

“Let them be smaller”

Renewing Saint Francis’ request for his religious brothers – “Let them be smaller [It. “minori” = minor, lesser]” – Pope Francis concluded his address with the prayer, “May God both preserve and increase your littleness.”