Pope: Every Mass means entering into the Risen Lord's victory 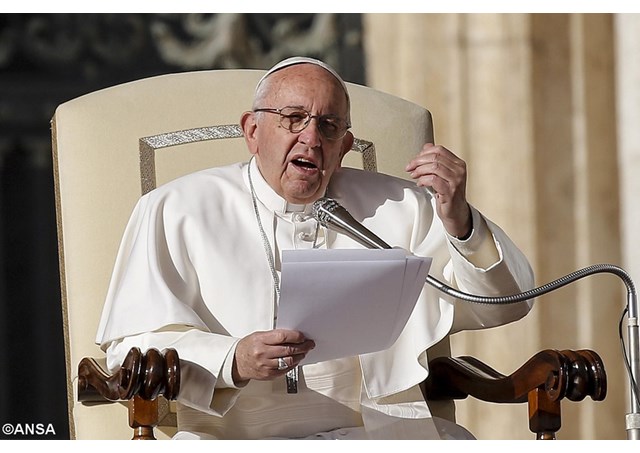 In his continuing catechesis on the Eucharist during his General Audience, Pope Francis on Wednesday reflected on the Mass “as the memorial of Christ’s passover from death to life.”

The Pope explained that in the Bible, a “memorial” is more than a mere remembrance of a past event; It is he said, “the making present of that event, which enables us to share in its saving power.”

Jesus, the Holy Father stressed, pours out his mercy upon us at every celebration of the Eucharist, “in order to renew our hearts, our lives and our entire world.”

Every Mass, said Pope Francis, is a ray of the sun where there is no sunset and participating in this celebration, especially on Sunday, means entering into the Risen Lord's victory, and being illuminated by his light…”

By making present the Lord’s paschal mystery, he continued, “the Eucharist strengthens us to bear witness, like the martyrs of old, to his triumph over death and to love others as he does, freely giving of ourselves for their good.”

Mass is not a show

The Mass, underlined the Pope “is not a show”. We don’t chat or take photos during the celebration because it is the memorial of the Jesus’ Passion, which he accomplished for us, in order to free us from oppression and to enter into the promised land of eternal life.

Concluding his Catechesis, the Holy Father said, that when we enter a church to celebrate Mass, let us think about Jesus giving his life for us. “The show disappears, the gossip, the comments and the things that lead us away from this beautiful thing, which is the Mass, the triumph of Jesus.”