World Day of the Poor: A day for giving and receiving 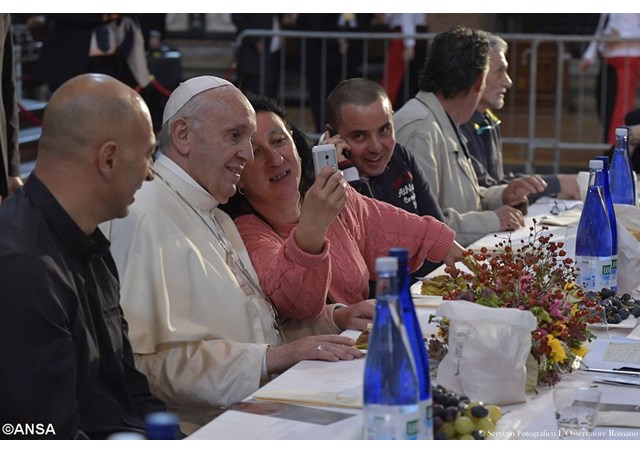 (Vatican Radio) This Sunday parishes in Rome and around the world will mark the first World Day of the Poor which is just one of the fruits of the Jubilee of Mercy.

The Pontifical Council for the Promotion for the New Evangelization has been tasked with the organization of the initiative called by Pope Francis.

“The Holy Father announced this initiative, occasion, this opportunity for grace during the Jubilee when he reached out to those who are socially marginalized and so this is an opportunity for the Church around the world to not only celebrate and assist and be with those who are poor, but also to change our attitudes about poverty”, says Monsignor Geno Sylva, English language official at the Council.

Listen to Lydia O'Kane's interview with Monsignor Geno Sylva, English language official at the Pontifical Council for the Promotion for the New Evangelization:

“We are all poor in some way” … notes Mons Sylva, “and everybody’s got something to give, something to offer and this day can serve to open our minds and hearts, our attitudes towards the poverty that exists every day of the year.”

He goes on to say that, Pope Francis, “continues to focus the Church, its attention towards how is it we respond to poverty institutionally, but also to people individually.”

Marking World Day of the Poor

The World Day of the Poor is being marked not only in Rome, but also in parishes around the world and Mons Sylva says that the Pontifical Council for the Promotion for the New Evangelization has published information on its website in six languages as a pastoral aid for dioceses and parishes worldwide who wish to take part in this initiative

Some of the events organized in Rome include a prayer vigil in the church of St Lawrence Outside the Walls on Saturday 18th at 8pm. There will also be a Mass celebrated by Pope Francis on Sunday morning the 19th which will see some four thousand needy people take part, followed by a lunch in the Paul VI hall.