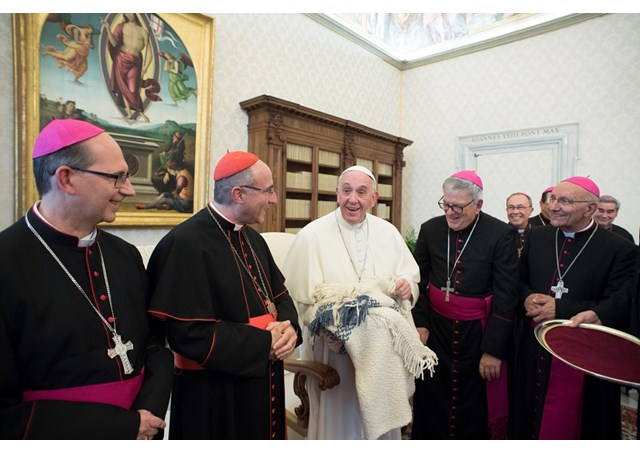 (Vatican Radio) Pope Francis on Thursday received in audience the Bishops of Uruguay who are in the Vatican for their ad limina visit.

They will be in the Vatican until November 22nd and are scheduled to meet with officials at various Vatican Dicasteries, including a meeting with members of the Congregation for the Causes of Saints where they will discuss some ongoing beatification and canonization processes.

On Sunday, November 19th, they will concelebrate Mass with Pope Francis in St. Peter’s Basilica for the 1st World Day of the Poor.

Bishop Heriberto Bodeant of Melo told us that the bishops of Uruguay are very close to Pope Francis also thanks to the geographical proximity of their homelands.

Bishop Bodeant notes that the Uruguayan bishops come from the same ‘neighbourhood’ where Cardinal Bergoglio used to live, and they speak the same kind of Spanish as he does.

He says that they also recognize in him the echo of their Latin American ‘way’ in communion with the whole Catholic Church and in line with the directives of the Aparecida document which Bergoglio himself penned.

He says they are listening to his appeal to go forth and into the existential and geographical peripheries and in this appeal they recognize a Latin American voice: “this is very encouraging for us”.

“Pope Francis knows deeply our country and the Uruguayan church” he said and is very aware of the reality the Catholic Church works within after more than a century of secularized culture.

“Religion is banned in public schools, religious ignorance is frequent, the charisma must be permanently announced” he said.

After this session with Pope Francis, Bishop Bodeant concluded: “we felt our hearts burning, we are ready to go on the road and to continue inviting all our people to live a personal encounter with Jesus Christ in His Church.”