Card. Parolin urges US Bishops to work for a more just and inclusive society 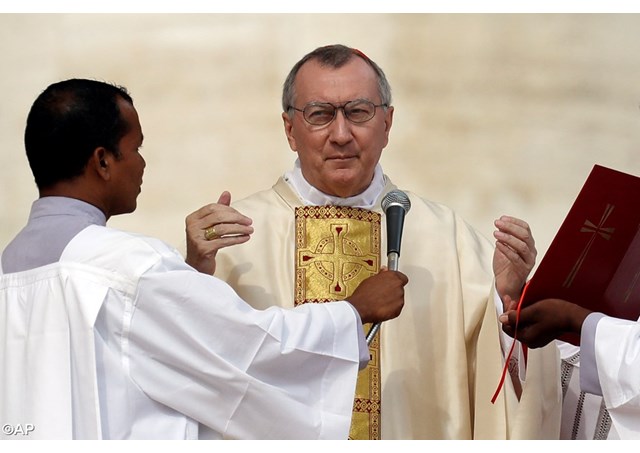 (Vatican Radio) Cardinal Pietro Parolin has urged US Bishops to continue their prophetic witness in the face of the challenges facing the nation.

The Vatican Secretary of State’s words came as he travelled to the United States to join celebrations for the 100th anniversary of their episcopal conference and for the opening of their plenary assembly.

To the Bishops gathered for Mass on Sunday at the Basilica of the National Shrine of the Assumption of the Blessed Virgin Mary in Baltimore, Cardinal Pietro Parolin reflected on the liturgical reading of the day and said “May the fire of God's love inspire you as a body to make wise decisions free of all partisan spirit.”

This year’s plenary marks the centenary of the US Conference of Catholic Bishops that was founded in 1917 as the National Catholic War Council.

The conference, Parolin said, “originated in a Spirit-filled and wise response to the human suffering and displacement of the First World War.”

He noted that it is rooted in the care of American bishops for those who were “forced from their homes and came to the new world in search of security and a new life”.

Parolin recalled this history as, he said, “the Church in the US seeks to provide healing, comfort, and hope to new waves of migrants and refugees.”

He urged the bishops to provide a prophetic witness and “to be a source of wisdom and strength” and he praised the charitable institutions of the American Church.

The Cardinal also looked forward to a series of meetings which are being held to assess and improve Hispanic ministry in the US noting that it is a way to “foster that heightened sense of missionary discipleship which Pope Francis considers the heart of the new evangelization.”

“In the century prior to the founding of your conference, the challenge facing the Church in this country was to foster communion in an immigrant Church to integrate the diversity of peoples, languages, and cultures in the one faith, and to inculcate a sense of responsible citizenship and concern for the common good” he said.

Cardinal Parolin said the Catholic community is now called to work for a more just and inclusive society “by dispelling the shadows of polarization, divisiveness, and societal breakdown by the pure light of the gospel.”

He praised the bishops for defending the right to life of the unborn and for their concern for ensuring access to health care as well as for their contribution to the discussion of important social issues and political debates, in particular concerning issues that involve “the defense of moral values and the rights of the poor, the elderly, the vulnerable, and those who have no voice.”

Parolin concluded mentioning the importance of pastoral care and giving thanks for the Spirit's gift of wisdom shown in the bishops' conference, and prayed that that they “ make keep the lamp of faith burning brightly.”

The US Bishops assembly meetings are scheduled to continue through Wednesday.