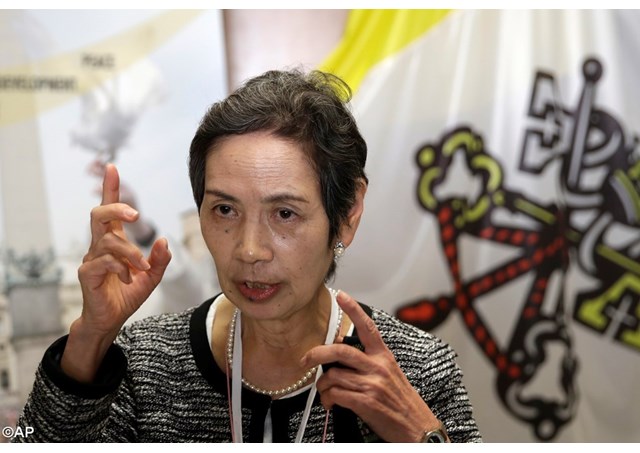 (Vatican Radio) The Vatican is calling for integral nuclear disarmament. According to the preliminary conclusions of a just-ended high level symposium entitled “Prospects for a World Free of Nuclear Weapons and for Integral Disarmament”, integral disarmament is both an urgent immediate need and a long-term process.

The symposium, organized by the Dicastery for Promoting Integral Human Development got underway as tensions escalated between the US and North Korea.

Wrapping up the symposium on Saturday, Cardinal Peter Turkson, President of the Dicastery for Promoting Integral Human Development, read out the following preliminary conclusions:

The Dicastery brought together religious leaders and representatives of civil society, officials of States and international organizations, noted academics and Nobel Laureates and students, to illuminate the connections between integral disarmament and integral development, and to explore the links among development, disarmament and peace.  As our Holy Father, Pope Francis, repeatedly reminds us, “everything is connected.”

1.     The use and possession of nuclear weapons deserves condemnation since they are indiscriminate and disproportionate instruments of war. In addressing us, Pope Francis said, “If we also take into account the risk of an accidental detonation as a result of error of any kind, the threat of their use, as well as their very possession, is to be firmly condemned.” Similarly, reprehensible are tests of nuclear weapons and the fall out which contaminate the atmosphere and the oceans; as global public good their contamination could constitute crimes against humanity.

2.     Nuclear deterrence does not adequately address the challenges of security in a multi-polar world.  In March 2017 our Holy Father wrote in a message: “If we take into consideration the principal threats to peace and security with their many dimensions in this multipolar world of the twenty-first century as, for example, terrorism, asymmetrical conflicts, cybersecurity, environmental problems, poverty, not a few doubts arise regarding the inadequacy of nuclear deterrence as an effective response to such challenges.”

3.     Nuclear deterrence does not create a stable or secure peace; it contributes to fear and conflict.  As our Holy Father said to us: “Weapons of mass destruction, particularly nuclear weapons, create nothing but a false sense of security.”  They also create a culture of “mutual intimidation” in the international system.

4.     Spending on nuclear weapons wastes resources that are needed to address the root causes of conflicts and to promote development and peace.

5.     The humanitarian impacts of the use of nuclear weapons are devastating and planetary.

6.     A world without nuclear weapons is possible. Pope Francis encouraged us to hope that “…progress that is effective and inclusive can achieve the utopia of a world free of deadly instruments of aggression…..”

7.     Peace is built on the foundation of justice. Integral disarmament and integral development are connected.  As Pope Francis recalled, Pope Paul VI “set forth the notion of integral human development and proposed it as ‘the new name for peace’.”

8.     Nuclear disarmament is a global issue, requiring a global response.  As Pope Francis wrote in March 2017:  “Growing interdependence and globalization mean that any response to the threat of nuclear weapons should be collective and concerted, based on mutual trust.”

9.      Integral disarmament is both an immediate urgent need and a long-term process.  In March 2017 Pope Francis made clear:  “Achieving a world without nuclear weapons involves a long-term process, based on the awareness that ‘everything is connected’ within the perspective of an integral ecology (cf. Laudato Si’, 117, 138). The common destiny of mankind demands the pragmatic strengthening of dialogue and the building and consolidating of mechanisms of trust and cooperation, capable of creating the conditions for a world without nuclear weapons.”

10.  Dialogue is essential.  This dialogue must be inclusive, engaging both nuclear States and non-nuclear States, and involving civil society, international organizations, governments and religious communities.  In particular, the Catholic Church is committed to advance this dialogue at all levels.

11.  Call upon States that have not yet done so, to consider signing and ratifying the Treaty on the Prohibition of Nuclear Weapons.

12.  Most importantly, let us commit our efforts to the call for integral nuclear disarmament to prayer by all!

Everything is connected; and everyone is connected.  Together we can rid the world of nuclear weapons, invest in integral human development, and build peace.  These preliminary conclusions do not represent the end of the conversation, but rather the beginning of future dialogue and action.