Pope at General Audience: through the Eucharist we receive God 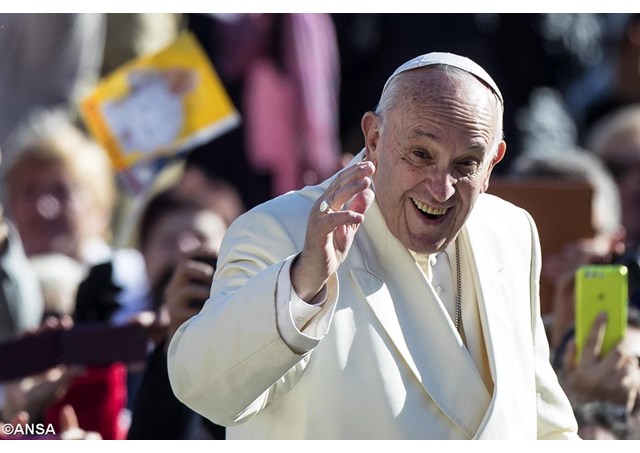 (Vatican Radio) Pope Francis has reminded the faithful that the Eucharist is a wonderful event during which Jesus Christ, our life, becomes present.

Speaking to the crowd gathered in St. Peter’s Square for the Wednesday General Audience, Pope Francis began a new series of reflections focusing on the Eucharist and highlighting the importance of how we attend and of how we participate in Mass in order to really experience our relationship with God.

To the some 13,000 pilgrims present for the weekly audience, Pope Francis said that while at Mass “the Lord is present with us but many times we talk among ourselves and we are not close to Him” during the celebration.

Importance of rediscovering the meaning of the Sacraments

He explained that for us Christians it is essential to understand the meaning and the value of Holy Mass in order to be able to fully live our relationship with God.

Remembering Christians who have died to defend the Eucharist

“We cannot forget the great number of Christians who, in the entire world, in two thousand years of history, have resisted until death in order to defend the Eucharist” he said.

And he remembered those whom, he said , “still today, risk their lives to participate at Sunday Mass”.

The Pope  recalled the history of Christians in North Africa who were caught celebrating Mass in 304, during the persecutions by the Roman Emperor Diocletian: “When asked why they had faced such danger, the Christians said that their Christian life would end if they did not go to Mass.”

Those Christians, he said, were killed and became witnesses of the Eucharist, which they chose over their mortal lives.

Noting that it is important to go back to the roots and rediscover what is the true meaning of the actions we carry out during the celebration of the Sacraments, the Pope said the Eucharist allows us “to take part in the sacrifice of Mass and approach the table of the Lord.”

He explained that the word Eucharist means thanksgiving, because we thank God for allowing us to receive him.

Francis also referred to the Second Vatican Council which, he said, pushed forward a series of liturgical renewals in order to encourage the encounter between the faithful and Christ.

Describing the Sacrament of the Eucharist as “an amazing event during which the Lord is present”, the Pope noted that too often the faithful describe the Mass as boring: “Is the Lord boring? He asked those present: No, no, it’s the priest. It’s the priests? Then the priests must convert!”

And explaining why we do certain things during Mass he posed the question: “Have you seen the way children make the sign of the Cross?”

Lift up your hearts not your cellphones

And furthering his comments on how, too often, the Mass is lived in a superficial way, Pope Francis remarked on the fact that the priest who celebrates says “Lift up your hearts” not “Lift up your cellphones  to take a photo!”

“This is a bad thing” he said, “It makes me very sad when I celebrate Mass here in the Square or in the Basilica and I see many cellphones raised. And it’s not only the faithful, but also many priests and bishops. Please! Mass is not a show!”

It is very important, Pope Francis concluded, to rediscover the meaning of the Eucharist and of the other Sacraments which are the signs of God’s love, the privileged ways to meet with Him.