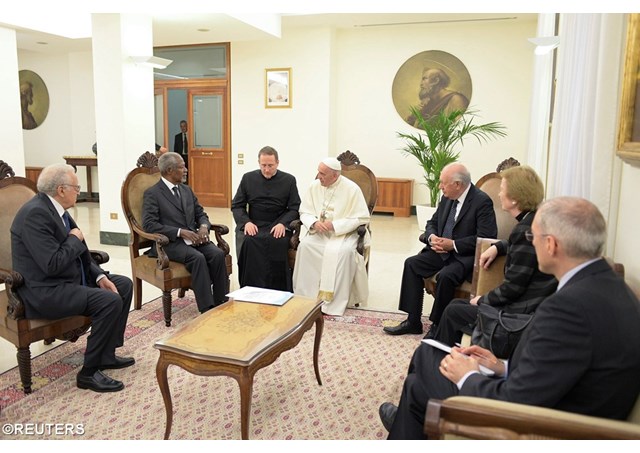 (Vatican Radio) Pope Francis had a private meeting at Santa Marta on Monday afternoon with members of The Elders, an independent group of global leaders working for peace and human rights around the world.

The Elders was established 10 years ago by former South African President Nelson Mandela and is currently marking the group’s 10th anniversary with a campaign called “Walk Together”  - continuing Mandela’s long walk to freedom.

Just after the audience, Philippa Hitchen spoke to two of the founding members of The Elders, former UN Secretary General Kofi Annan and Mary Robinson, former Irish President, former UN high commissioner for human rights and, more recently, UN envoy on climate change. Philippa began by asking Kofi Annan about the issues they were able to discuss during their papal audience…

The former UN leader says it was important for four representatives of the group to come to the Vatican because they share many common interests and values. He says they wanted to engage with Pope Francis and “discuss how we can work together, how we can pool our efforts on some of these issues”.

Among the areas of discussion, he continues, were the questions of migration, nuclear weapons peace, mediation and conflicts, as well as climate change and gender equality, that is “the importance of giving women a voice and respecting their role”. He adds “I hope this will be the first of many meetings”.

Shared efforts to be a voice for marginalised

Former Irish President Mary Robinson says the group came to express “an appreciation for the role he is playing and the fact that he, like The Elders, is trying to be a voice for the voiceless and the marginalized, trying to deal with the most difficult areas of conflict.

She says they also spoke about countries including Venezuela and Congo, as well as focusing on climate change, all issues, she notes, where “the pope has given leadership”.

Robinson says she was also struck by the “warmth and affection and humour” in their meeting. “I was very struck by how relaxed the pope was with us, how much he joked”, she says, adding that Pope Francis seemed to “feel at home” as they discussed “common values, a common moral purpose, common problems”

I think he could be a future ‘Elder’, Annan says and Robinson quips, “I think he’s a Super Elder”.

Over the coming days we will be featuring further excerpts from this interview, as Kofi Annan and Mary Robinson discuss the COP23 climate conference, gender equality in politics, the role of diplomacy and peacemaking, migration and refugees, as well as the situation in Myanmar as Pope Francis prepares to travel there at the end of November.