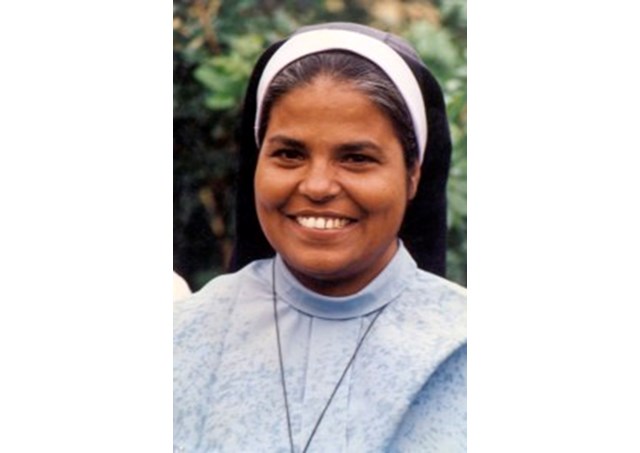 The CBCI Secretariat has issued a Press Release on Thursday, ahead of the Beatification of Sister Rani Maria which will be held on Saturday in Indore, India.

Sister Rani Maria, professed sister of the Franciscan Clarist Congregation whose cause was cleared for beatification on March 23, 2017 will be declared ‘Blessed’ at a ceremony to be held on November 4 in Indore.

Beatification is the penultimate stage in the four-phased canonization process in the Catholic Church. Rani Maria’s cause of canonization began in 2003 and she was declared a Servant of God four years later.

Sr. Rani Maria died of 54 stab wounds from an assassin in central India 22 years ago.  The assassin Samandar Singh who was hired by some landlords, stabbed her inside a bus on February 25, 1995. He followed her when she ran out of the crowded bus and continued to stab her.  She died on the roadside at Nachanbore Hill, near Indore.

The beatification ceremony will take place on the premises of St Paul’s Higher Secondary School near St  Francis Assisi Cathedral in Indore. It will be jointly organised by the Archdiocese of Ernakulam-Angamaly and the Franciscan Clarist Congregation(FCC), the religious order to which Sister Rani Maria belonged.

The full text of the CBCI Press Release is here below:

The Catholic Church in India rejoices on the occasion of the Beatification of Sr. Rani Maria and gives thanks to God for giving the people of India another Saint as a model to imitate and as an intercessor in Heaven. Sr. Rani Maria will be beatified on Saturday, November 4, 2017, at Indore. Cardinal Angelo Amato, the Prefect of the Congregation for the Causes of Saints, is coming down specially from the Vatican to preside over the Ceremony. All four Indian Cardinals, the Apostolic Nuncio to India, nearly 50 Bishops and hundreds of Priests, Sisters and lay faithful will participate in the Solemn Ceremony.

Sister Rani Maria Vattalil, a member of the Franciscan Clarist Congregation, was slain on 25th February, 1995. According to the Police she was stabbed 54 times in front of more than 50 bus passengers in a jungle area near Udainagar (Madhya Pradesh) allegedly at the behest of moneylenders affected by the nun's social work among village women, who were organizing self-help groups.

The Beatification of Sister Rani Maria is a declaration by the Pope as head of the Church that the deceased Sister had died a martyr's death and is now dwelling in heaven. As a process, the beatification consisted a long examination of the life, virtues, writings, and reputation for holiness. Sister Rani Maria will now be called “Blessed” and may be venerated by the faithful in India and some other specific places.

Samandar Singh, the man who served a prison term for the 1995 murder of Sr. Rani, told Asia News in 2010 “I accept full responsibility for my heinous murder of Sr. Rani Maria. I cannot say that I was instigated, because my own hands stabbed her repeatedly and for this, I will regret my actions till the day I die.”  He went on to say “In my own small way, I try to follow her example, helping those who are less fortunate than me, like Tribal Christians and all those who are marginalised.”

The whole Catholic Church, while being filled with joy also looks upon Blessed Rani Maria as a model of sacrifice and selfless witness. As the Bishop of Indore, Bishop Chacko Thottumarickal expresses it so beautifully: “Blessed Rani Maria is a model for us as she was ready to shed her blood for the sake of the poor and downtrodden”. The President of the CBCI, Cardinal Baselios Cleemis, the Cardinal, Office-Bearers and Bishops wish the people of Indore all God’s blessings. We take this opportunity to thank the Government of India and the Government of Madhya Pradesh for all the support given to the Catholic Church in organizing this celebration.

May the Blessed Rani Maria intercede for us in our work for the deprived and marginalized sections of our society.