Pope Francis warns warmongers: the only fruit of war is death 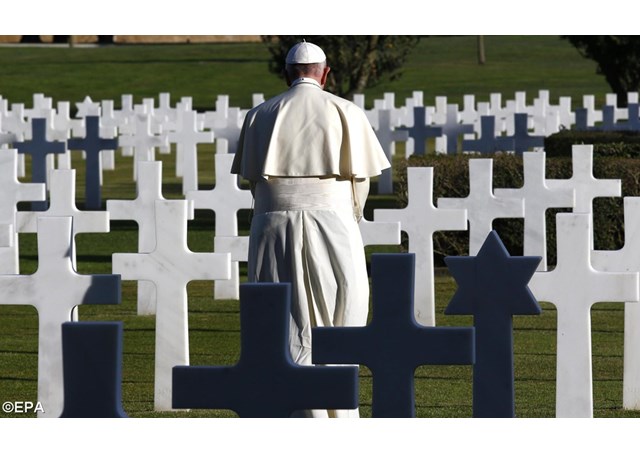 (Vatican Radio) Pope Francis celebrated the Feast of All Souls Day on Thursday commemorating all those who have died in war, reminding humanity not to forget past lessons and warning that the only fruit yielded by conflict is death.

His words of warning and his powerful condemnation of warmongers came during his homily at the Sicily-Rome American War Cemetery some 50 kilometers south of Rome.

Taking the occasion to reiterate his deep conviction that “wars produce nothing more than cemeteries and death” the Pope said he chose to visit a war cemetery as a sign “in a moment when our humanity seems not to have learned the lesson, or doesn't want to learn it.”

The Nettuno US War Cemetery and Memorial is the final resting place for thousands of men who died during military operations carried out to liberate Italy –  from Sicily to Rome – from Nazi Germany.  Its chapel contains a list of the 3095 missing.

Pope Francis arrived at the War Cemetery early in the afternoon so that he could spend time reflecting and paying his personal respects to the 7,860 – mostly young – soldiers who gave their lives in the name of freedom and respect for humanity.

Walking in poignant silence between the rows and rows of tombstones, Pope Francis bowed to read some of the names and dates inscribed in the white marble: stark reminders of the fact – as he stated during his homily – that the only fruit of war is death.

To the somber congregation gathered on this holy day to honour all those who have died, Pope Francis said he chose to come to a place where thousands died in bloody combat, to appeal to the Lord – yet again “Please God: stop them. No more war. No more useless carnage.”

The Pope delivered his off-the-cuff homily with an emotion charged by the dramatic setting provided by hundreds of thousands of graves of young men whose hopes – he said - were cruelly severed, at a time in which the world is again at war and is even preparing to step-up war.

“Please God – he prayed – everything is lost with war”

“There are men, Francis said, who are doing everything to declare war and to enter into conflict. They end up destroying themselves and everything.”

Remarking on the fact that today is a day of hope, but also of tears, he said that the tears wept by those who have lost husbands, sons and friends at war should never be forgotten.

Humanity does not seem to want to learn the lesson

“But humanity, the Pope continued, has not learnt the lesson and seems not to want to learn the lesson”.

Let us pray, he said, in a special way for all those young people caught up in conflict, “many of whom are dying every day in this piecemeal war”.

And he remembered the thousands of innocent children who are also paying the price of war.

“Let us ask the Lord, Pope Francis concluded, to give us the grace to weep”.