Pope Angelus: Celebrating the Saints who transmit the light of God 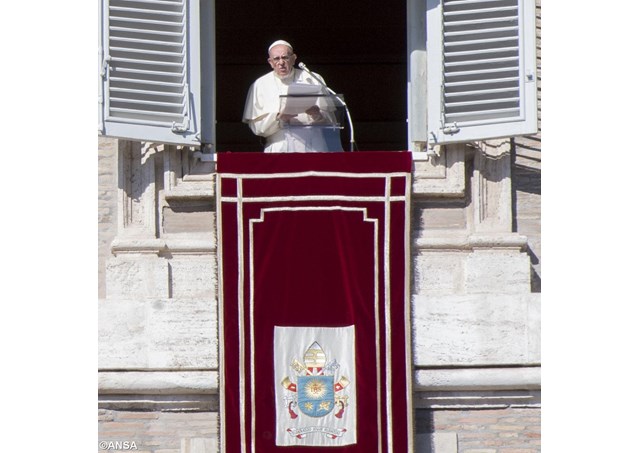 (Vatican Radio) Pope Francis during the Angelus on Wednesday marked the feast of All Saints, telling the faithful in St Peter’s Square that it was a celebration of the many simple and hidden people who help God to push the world forward.

“Saints are not perfect models, but people marked by God. We can compare them to church stained-glass windows, which bring light into different shades of color.”

Those were Pope Francis’ words on Wednesday on the Solemnity of All Saints, during his Angelus address from St Peter’s Square.

The Pope explained that “Saints are our brothers and sisters who have received the light of God in their hearts and have transmitted it to the world, each according to their own "tonality". This is the purpose of life, continued Pope Francis, to pass on the light of God; and also the purpose of our lives....”

Referring to Wednesday’s Gospel reading, the Holy Father said, “Jesus speaks to his own, to all of us, saying "Blessed".

“Whoever is with Jesus is blessed, he is happy, noted the Pope, adding that happiness is not in having something or becoming someone, “no, the real happiness is to be with the Lord and to live for love, he said.”

The Pope told those gathered in St Peter’s Square that, “the ingredients for a happy life are called the beatitudes”.

They do not require tremendous gestures, he said, “they are not for supermen, but for those who live through daily trials and struggles. They are for us.”

Returning to the Saints, the Holy Father described how “they too have breathed in all the air polluted by the evil that is in the world, but on the journey they never lose sight of the path of Jesus, that is indicated in the beatitudes, which, he said, are like the map of Christian life.

The Pope went on to say that the feast of All Saints is a celebration of all those who have “reached the goal indicated by this map: not only the saints of the calendar, but so many brothers and sisters "next door" that we may have met and known.”

This day, Pope Francis said, “is a family celebration of many simple and hidden people who actually help God to push the world forward.”