Pope and Anglican leader appeal for peace in South Sudan 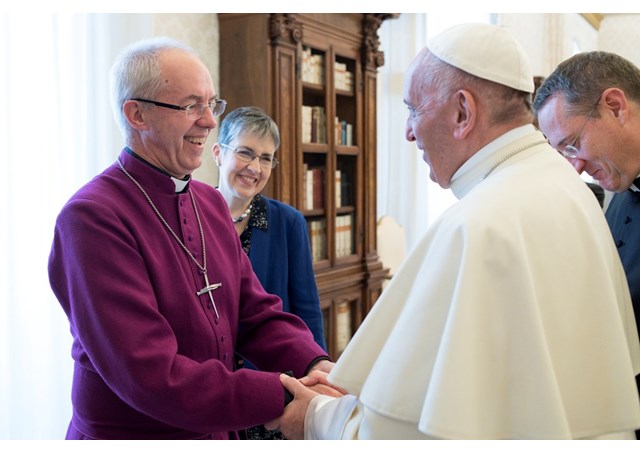 (Vatican Radio) Pope Francis met on Friday with the Archbishop of Canterbury, Justin Welby, together with the new director of Rome’s Anglican Centre, Archbishop Bernard Ntahoturi of Burundi. Following their half hour encounter in the Apostolic Palace, the two Anglican archbishops and their wives joined the pope for lunch in his Santa Marta residence to continue the conversation.

On Thursday, the Anglican leader presided at Vespers at Rome’s Caravita church for the installation of Archbishop Bernard Ntahoturi as his official representative to the Holy See. The Vatican’s foreign minister, Archbishop Paul Gallagher, who previously served as nuncio in Burundi, preached the homily, stressing that ecumenical engagement is a moral imperative for all Christians.

The Anglican archbishop says his meetings with the pope were “full of meaning, but also full of joy, a good deal of laughter, very relaxed but very thoughtful”. In particularly, he says, they talked about mutual concerns on conflict, human trafficking, and the need for Church unity in a fractured world.

He notes that, like his predecessors during their visits to Rome, he wears the episcopal ring that Pope Paul VI gave to Archbishop Michael Ramsey in 1966. He says there has been enormous progress towards unity since then and both ARCIC and IARCCUM “continue the theological and missional dialogues very, very effectively”. Alongside that, there is ecumenism of action, and of prayer, something which has grown out of the theological work, he says, but is also pushing it forward.

Separation in the Eucharist

Speaking about the lack of unity in the Eucharist, Archbishop Welby says he is reminded of that each day in Lambeth Palace, celebrating with Catholic and non-Catholic members of the youth community of St Anselm.  It is painful, he says, but in another sense, it is “a healthy pain that compels us to work harder” for unity.

Asked about a joint visit to South Sudan, the Anglican leader says “a visit like that has to be done at a moment when it can make an enormous difference” and “tip the balance towards peace”. He says that he and the Holy Father call on the political leaders “to turn away from violence and think of the people in South Sudan”. He recalls a recent visit to refugee settlements in northern Uganda housing 260.000 people, a small fraction of those who’ve fled the violence. We are “waiting and praying” for a change of heart from the political leaders, he says.

Don't be paralised by disagreements

Asked about divisions within the Anglican world, in particular over homosexuality, Archbishop Welby says “you can’t be paralised by disagreements”, which all Churches are currently facing. In a communion as diverse as the Anglican world, he adds, there are bound to be disagreements “but we have to see the call of Christ to be united in the service of the poor…..and not let anything distract us from the proclamation of the Good News”.