Christmas tree and crib scene to be inaugurated on Dec 7th 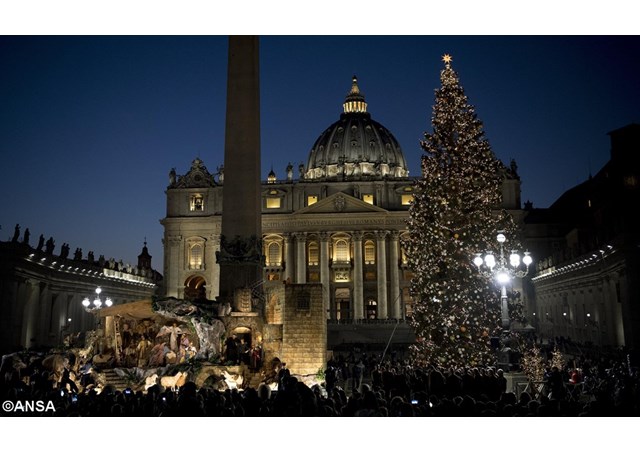 (Vatican Radio) The giant Christmas Crib and fir tree which traditionally adorn St Peter’s Square throughout the festive season will be inaugurated, this year, on the afternoon of December 7th.

The crib scene for Christmas 2017 will be donated by the ancient Abbey of Montevergine in the Campania region of southern Italy. The scenery and crib figures, in 18th century Neapolitan costumes, will be produced by artisans in a local workshop. The two metre high figures, inspired by the theme of the Works of Mercy, will be made of coloured  terracotta with garments in traditional fabrics.

The Christmas tree will be a giant, 28 metre high red fir, given, by the archdiocese of Elk, in north-eastern Poland. It will be cut down by a member of the local forestry service and transported over two thousand kilometres across central Europe and Italy, before arriving here in the Vatican.

The tree will be decorated with stars and baubles designed by young cancer patients from several Italian hospitals. The decorations have been made out of clay by children and their parents during therapeutic workshop sessions and reproduced in hard-wearing synthetic materials that can stand up to the winter weather conditions in St Peter’s Square. A number of children from the earthquake-hit areas of central Italy have also taken part in this design project.

On the morning of December 7th, some of the young artists, together with delegations from Poland and from the Campania region, will meet with Pope Francis, ahead of the official inauguration and lighting ceremony at 4.30pm.

Both the tree and the crib scene will remain in St Peter’s Square until the evening of Sunday January 7th 2018, as the Church marks the end of the Christmas season with the feast of Our Lord’s Baptism.