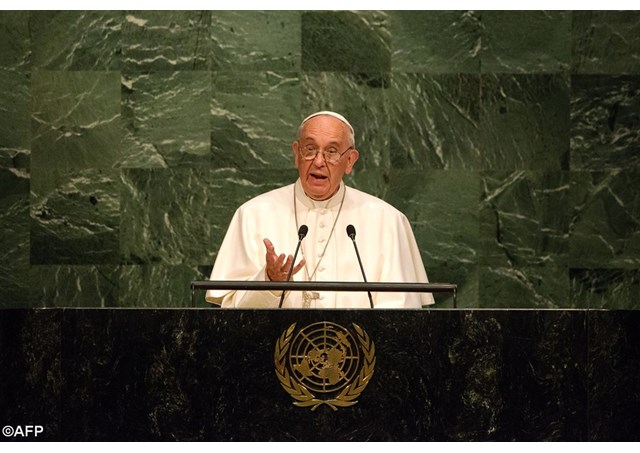 (Vatican Radio) On October 24th we mark UN Day. It celebrates the anniversary of the entry into force in 1945 of the United Nations Charter. With the ratification of this founding document by the majority of its signatories, including the five permanent members of the Security Council, the United Nations officially came into being.

Pope Francis, who has addressed the UN General Assembly in the United States and staff members at the UN Office in Nairobi, has often referred to and appealed to the UN in many of his speeches and messages regarding international affairs.

His tweet for the UN Day reads “Let us all work together to promote peace among peoples and guarantee respect for human rights”.

Archbishop Ivan Jurkovič is the Holy See’s Permanent Observer to the United Nations in Geneva. After a private audience with Pope Francis this week he spoke to Vatican Radio about his meeting with the Pope, about the significance of the Organization in today’s world, and about the growing consideration shown towards the Catholic Church and other faith-based organizations at the UN.

Archbishop Jurkovič describes his audience with Pope Francis as a moment of extreme encouragement and recognition for his work at the United Nations.

“His first words were: ‘You are in the forefront of Church action’.” he said.

He said he underlined the importance of the work we do in the four missions of the Holy See in the world: in New York, Geneva, Vienna, and Paris and pointed out that the activity of the Holy See, of the Church and of this Pontificate, in the eyes of international organizations, is very important.

Jurkovič said that at the heart of the Pope’s concerns regarding his particular sphere are the armament issue and all that regards migration.

He spoke of the role of the UN in today’s world and of how the organization acts as a catalyst “a global point of reference” where actors on the world scenario can find common space and room for debate.

Jurkovič also spoke of the increased consideration enjoyed by the Catholic Church in the international environment provided by the UN and about the particular sensitivity of Pope Francis for issues that are at the heart of the UN’s very mandate.

“Why this? A little is due to Pope Francis’ style, to his direct involvement in almost all the issues that are concerned with the pain of humanity. This is perceived by international organizations in a very strong way” he said.