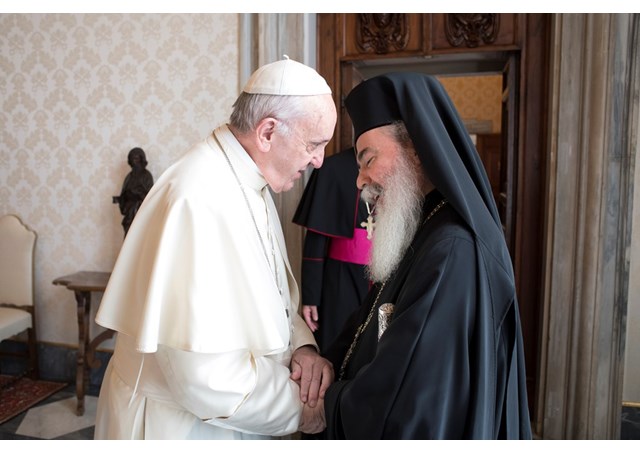 (Vatican Radio) Pope Francis met on Monday with the Greek Orthodox Patriarch of Jerusalem, Theophilos III, calling for an end to violence and discrimination against people of different faiths in the Holy Land. The Orthodox leader is visiting Rome from October 22nd to 25th, meeting with top Vatican officials.

During the audience, Pope Francis recalled his own journey to Jerusalem in 2014 and expressed his pleasure at the recent restoration of Jesus’ tomb in the Basilica of the Holy Sepulchre, a project that saw close cooperation between the Orthodox, the Armenians and the Franciscan Custody of the Holy Land.

Appeal for justice and peace

The pope conveyed his closeness to all those suffering from the ongoing conflict between Israelis and Palestinians, noting that the lack of understanding continues “to create insecurity, the restriction of fundamental rights and the flight of many people from their land”. He called for increased efforts to achieve peace based on justice and recognition of the rights of all people.

The Status Quo of Jerusalem must be defended and preserved, the pope insisted, while violence, discrimination and intolerance against Jewish, Christian or Muslim places of worship must be firmly rejected.

Call for harmony between Christians

Pope Francis also sent greetings to members of the different Christian communities in the region, saying he hoped they may continue to be recognized as citizens and believers who contribute to the common good. This contribution will be all the more effective, he stressed, to the extent that there is harmony between the different Churches.

In particular the pope called for increased cooperation in supporting Christian families and young people, so that they are not forced to leave the country. While we cannot change the past or overlook the grave failures of charity over the centuries, he said, Christians must look to a future of reconciliation and communion, in order to fulfill the Lord’s prayer “that they may all be one”.

With great joy I welcome all of you to Rome.  I reciprocate with gratitude and fraternal affection the warm welcome Your Beatitude offered me during my visit to Jerusalem.  Still fresh in my mind is the attentiveness with which you accompanied Ecumenical Patriarch Bartholomew and myself in the Basilica that preserves the places of the Lord’s crucifixion, burial and Resurrection.  I am still moved when I think of our moment of prayer in the aedicule of the empty Tomb, and I again express my pleasure at the restoration of that most holy place.  It has not simply secured the integrity of a historical monument, but also enabled the empty tomb to continue to testify that: “He has risen, he is not here; see the place where they laid him” (Mk 16:6).  I rejoice that the Greek Orthodox Patriarchate of Jerusalem, the Armenian Patriarchate of Jerusalem and the Franciscan Custody of the Holy Land have worked together in such harmony on this project, as they also did for the Basilica of the Nativity in Bethlehem.  I thank Your Beatitude very much for your own efforts in this regard.

Our meeting allows me to renew my closeness to all those suffering from the conflicts that for decades have beset the Holy Land.  The uncertainty of the situation and the lack of understanding between the parties continue to create insecurity, the restriction of fundamental rights, and the flight of many people from their land.  I invoke God’s help in this, and I ask all those involved to intensify their efforts to achieve a stable peace based on justice and recognition of the rights of all.  To this end, any kind of violence, discrimination or displays of intolerance against Jewish, Christian and Muslim worshipers, or places of worship, must be firmly rejected.  The Holy City, whose Status Quo must be defended and preserved, ought to be a place where all can live together peaceably; otherwise, the endless spiral of suffering will continue for all.

I would offer a particular greeting to the members of the various Christian communities in the Holy Land.  It is my hope that they will continue to be recognized as an integral part of society and that, as citizens and believers in their own right, they can continue tirelessly to contribute to the common good and the growth of peace, striving to further reconciliation and concord.  This contribution will be the more effective to the extent that there is harmony between the region’s different Churches.  Particularly important in this regard would be increased cooperation in supporting Christian families and young people, so that they will not be forced to leave their land.  By working together in this delicate area, the faithful of different confessions will also be able to grow in mutual knowledge and fraternal relations.

Here I would reaffirm my heartfelt desire and commitment to progress on our way to full unity, in obedience to Jesus’ fervent prayer in the Cenacle “that they may all be one… so that the world may believe” (Jn 17:21).  I know that past wounds continue to affect the memory of many people.  It is not possible to change the past, but, without forgetting grave failures of charity over the centuries, let us look to a future of full reconciliation and fraternal communion, and take up the work before us, as the Lord desires.  Not to do so today would be an even graver fault; it would be to disregard both the urgent call of Christ and the signs of the times sown by the Spirit along the Church’s path.  Inspired by the same Spirit, may we not let the memory of times marked by lack of communication or mutual accusations, or present difficulties and uncertainty about the future, prevent us from walking together towards visible unity, nor hinder us from praying and working together to proclaim the Gospel and to serve those in need.  In this regard, the ongoing theological dialogue between Catholics and Orthodox, in which the Greek Orthodox Patriarchate of Jerusalem participates actively and constructively, is a comforting sign of hope on our journey.  How good it would be to say of Catholics and Orthodox living in Jerusalem what the Evangelist Luke said of the first Christian community: “All who believed were together... one heart and soul” (Acts 2:44; 4:32).

Your Beatitude, I thank you and the distinguished members of your entourage most cordially for your visit.  I reaffirm my closeness to our Christian brothers and sisters in the Holy Land, and my affection for our friends of the other great religions who live there.  I hope and pray that the day of a stable and lasting peace for all will soon come.  “Pray for the peace of Jerusalem!  May they prosper who love you! [...]  For my brethren and companions’ sake I will say, ‘peace be within you!’” (Ps 122: 6-8).

[I would like us now to pray together for this, in the words of the “Our Father”]